Rett syndrome (RTT) is an X-linked neurodevelopmental disorder that is characterized by successive loss of acquired cognitive, social, and motor skills and development of autistic behavior. RTT affects approximately 1 in 10,000 live female births and is the second most common cause of severe mental retardation in females, after Down syndrome. Currently, there is no cure or effective therapy for RTT. Approved treatment regimens are presently limited to supportive management of specific physical and mental disabilities. In this issue, Krishnan and colleagues reveal that the protein tyrosine phosphatase PTP1B is upregulated in patients with RTT and in murine models and provide strong evidence that targeting PTP1B has potential as a viable therapeutic strategy for the treatment of RTT.

Reduced BDNF signaling in RTT is due to increased expression of PTP1B. 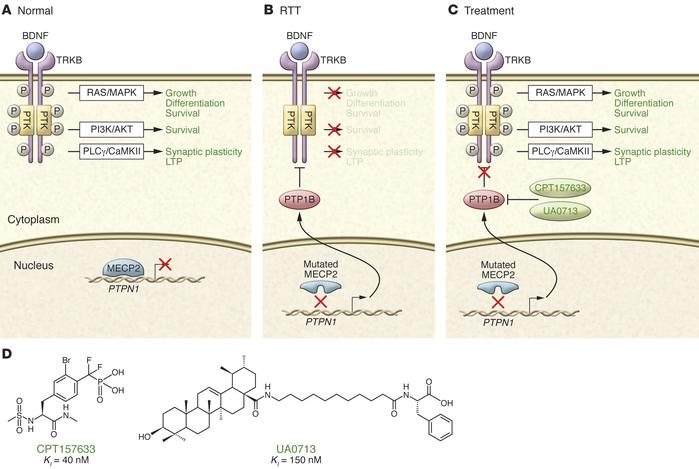 () Binding of BDNF to its cognate receptor TRKB induces ligand-receptor dimerization and autophosphorylation of tyrosine residues (Y706 and Y707) within the intracellular protein tyrosine kinase (PTK) domain, resulting in kinase activation. Subsequently, additional tyrosine residues within the juxtamembrane domain and C-terminus of TRKB are phosphorylated and provide docking sites for adapter and signaling molecules. These initiate signaling via several pathways, including RAS/MAPK, PI3K/AKT, and PLCγ/CaMKII, that ultimately lead to survival, growth, differentiation, synaptic plasticity, and long-term potentiation (LTP). In this issue, Krishnan and colleagues () demonstrated that the protein tyrosine phosphatase PTP1B directly targets the tyrosine residues within the TRKB kinase activation loop and therefore is a critical negative regulator of BDNF signaling. The transcriptional regulator MECP2 directly binds to the promoter region of , which encodes PTP1B, and suppresses its transcription. () In RTT, MECP2 function is impaired due to mutations in the gene. Consistently, PTP1B levels were upregulated in RTT patients and mouse models of RTT. () Specific inhibition of PTP1B activity with two small-molecule drugs (CPT157633 and UA0713) improved symptoms and survival in RTT animals, providing proof of principle for PTP1B inhibition as a potential therapeutic strategy in RTT. () Chemical structure of the PTP1B inhibitors CPT157633 and UA0713.