Hirschsprung’s disease (HSCR) is a severe congenital anomaly of the enteric nervous system (ENS) characterized by functional intestinal obstruction due to a lack of intrinsic innervation in the distal bowel. Distal innervation deficiency results from incomplete colonization of the bowel by enteric neural crest cells (eNCCs), the ENS precursors. Here, we report the generation of a mouse model for HSCR — named Holstein — that contains an untargeted transgenic insertion upstream of the collagen-6α4 () gene. This insertion induces eNCC-specific upregulation of expression that increases total collagen VI protein levels in the extracellular matrix (ECM) surrounding both the developing and the postnatal ENS. Increased collagen VI levels during development mainly result in slower migration of eNCCs. This appears to be due to the fact that collagen VI is a poor substratum for supporting eNCC migration and can even interfere with the migration-promoting effects of fibronectin. Importantly, for a majority of patients in a HSCR cohort, the myenteric ganglia from the ganglionated region are also specifically surrounded by abundant collagen VI microfibrils, an outcome accentuated by Down syndrome. Collectively, our data thus unveil a clinically relevant pathogenic mechanism for HSCR that involves cell-autonomous changes in ECM composition surrounding eNCCs. Moreover, as and are on human Chr.21q, this mechanism is highly relevant to the predisposition of patients with Down syndrome to HSCR.

Defective ENS formation in embryos is detected from E11.5 onward. 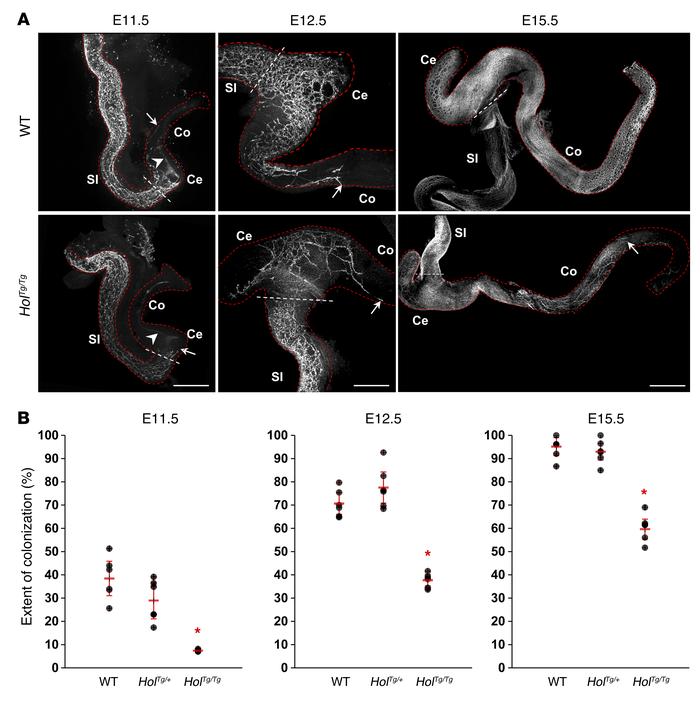 () Analysis of eNCC colonization in embryonic intestine at E11.5 (left; scale bar: 430 μm), E12.5 (middle; scale bar: 200 μm), and E15.5 (right; scale bar: 700 μm), using an anti–βIII-tubulin antibody. Arrows point to the most distal neuronal-fated eNCC of vagal origin, while arrowheads point to nonspecific staining of the meconium. SI, small intestine; Ce, cecum; Co, colon. () Quantification of the extent of eNCC colonization (at E11.5, E12.5, and E15.5) as measured from the base of cecum (white dashed lines in ) to the most distally located neuronal-fated eNCC of vagal origin. In comparison to that in wild-type tissues, the extent of bowel colonization by eNCCs is significantly decreased (data are presented as mean ± SEM; for each stage, = 6 intestines per genotype; * < 0.01; 1-way ANOVA).