Hirschsprung’s disease (HSCR) is a severe congenital anomaly of the enteric nervous system (ENS) characterized by functional intestinal obstruction due to a lack of intrinsic innervation in the distal bowel. Distal innervation deficiency results from incomplete colonization of the bowel by enteric neural crest cells (eNCCs), the ENS precursors. Here, we report the generation of a mouse model for HSCR — named Holstein — that contains an untargeted transgenic insertion upstream of the collagen-6α4 () gene. This insertion induces eNCC-specific upregulation of expression that increases total collagen VI protein levels in the extracellular matrix (ECM) surrounding both the developing and the postnatal ENS. Increased collagen VI levels during development mainly result in slower migration of eNCCs. This appears to be due to the fact that collagen VI is a poor substratum for supporting eNCC migration and can even interfere with the migration-promoting effects of fibronectin. Importantly, for a majority of patients in a HSCR cohort, the myenteric ganglia from the ganglionated region are also specifically surrounded by abundant collagen VI microfibrils, an outcome accentuated by Down syndrome. Collectively, our data thus unveil a clinically relevant pathogenic mechanism for HSCR that involves cell-autonomous changes in ECM composition surrounding eNCCs. Moreover, as and are on human Chr.21q, this mechanism is highly relevant to the predisposition of patients with Down syndrome to HSCR.

The Holstein mouse line is a model for aganglionic megacolon. 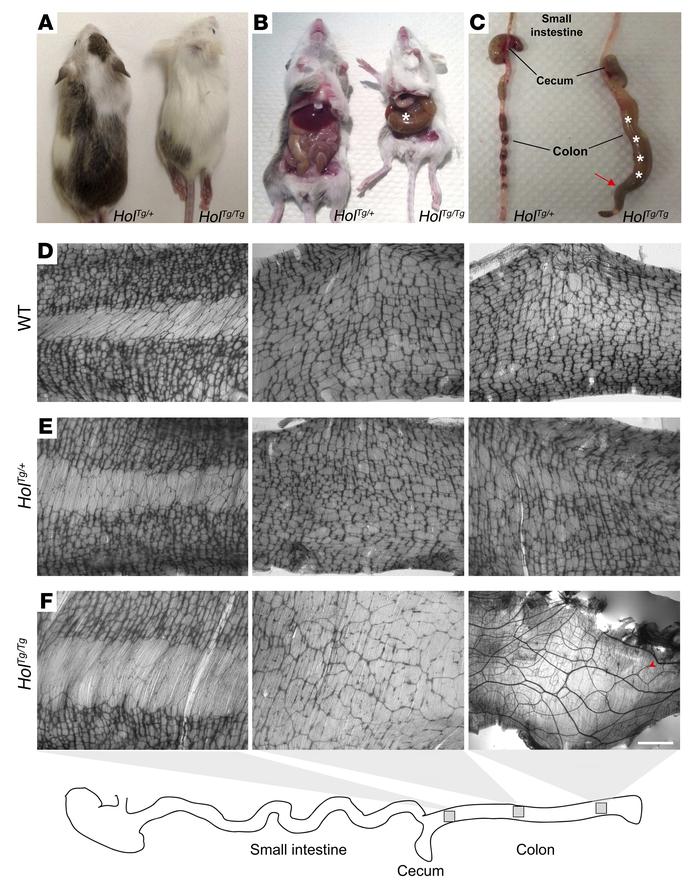 () Comparison between heterozygous () and homozygous () Holstein animals from a F2 litter at P20, showing allele dosage-dependent depigmentation. () mutants are smaller than their littermates and exhibit symptoms of aganglionic megacolon (asterisk). () These animals die due to blockage in the distal colon (arrow) and massive accumulation of fecal material (asterisks). (–) Labeling of the myenteric plexus in the colons of () wild-type, () , and () P20 mice via staining of AchE activity. In comparison to wild-type mice ( = 8) and controls ( = 7), the ENS network of animals ( = 12) is very slightly less dense in the proximal colon (left), is scarce and less interconnected in the mid-colon (middle), and is markedly absent in the distal colon (right), in which hypertrophic extrinsic nerve fibers typical of aganglionic megacolon as well as very rare isolated nerve cell bodies (red arrowhead) are seen. Scale bar: 1,000 μm.