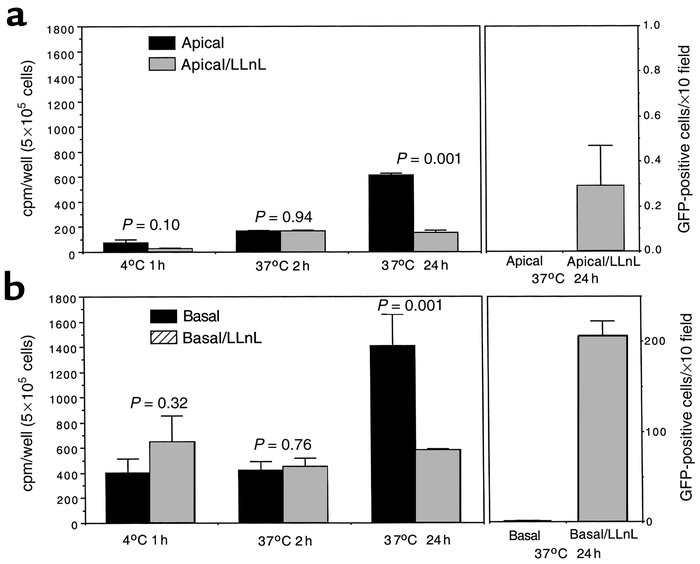 Binding and uptake of [S35]-labeled AV.GFP3ori in fully differentiated human bronchial epithelia. The ability of polarized bronchial epithelia to bind and internalize virus from the apical () and the basolateral () surfaces was quantified using [S35]-labeled rAAV. The binding assay was performed after incubation with virus at 4°C for 1 hour, followed by repeated washing in PBS. The combined bound and internalized virus was quantified after incubation with virus at 4°C for 1 hour, and subsequent incubation at 37°C for 2 hours or 24 hours. Nonspecific background binding of radiolabeled virus was determined in parallel studies on collagen-coated empty chambers not seeded with bronchial cells. Background counts (averaging 15.67 ± 5.17 cpm/well) were subtracted from experimental sample counts before analysis. Data in the left side of each panel are presented as the net cpm of bound/internalized virus (raw counts minus background counts of empty transwells). The results represent the mean (± SEM) of six independent transwells for each condition. Experiments were performed in triplicate from two independent tissue samples. The significance of the differences between each pair of samples (with or without LLnL) was evaluated using the Student’s test, and values are provided above the data for each condition. To correlate uptake of radioactive virus with the functional expression of the rAAV-encoded transgene, GFP expression from the same set of samples was quantified at 24 hours after infection by indirect fluorescent microscopy. The results (mean ± SEM; = 6) are presented as a bar graph on the right side of each panel.