The extracellular matrix (ECM) is the noncellular component critical in the maintenance of organ structure and the regulation of tissue development, organ structure, and cellular signaling. The ECM is a dynamic entity that undergoes continuous degradation and resynthesis. In addition to compromising structure, degradation of the ECM can liberate bioactive fragments that cause cellular activation and chemotaxis of a variety of cells. These fragments are termed matrikines, and their cellular activities are sentinel in the development and progression of tissue injury seen in chronic lung disease. Here, we discuss the matrikines that are known to be active in lung biology and their roles in lung disease. We also consider the use of matrikines as disease markers and potential therapeutic targets in lung disease. 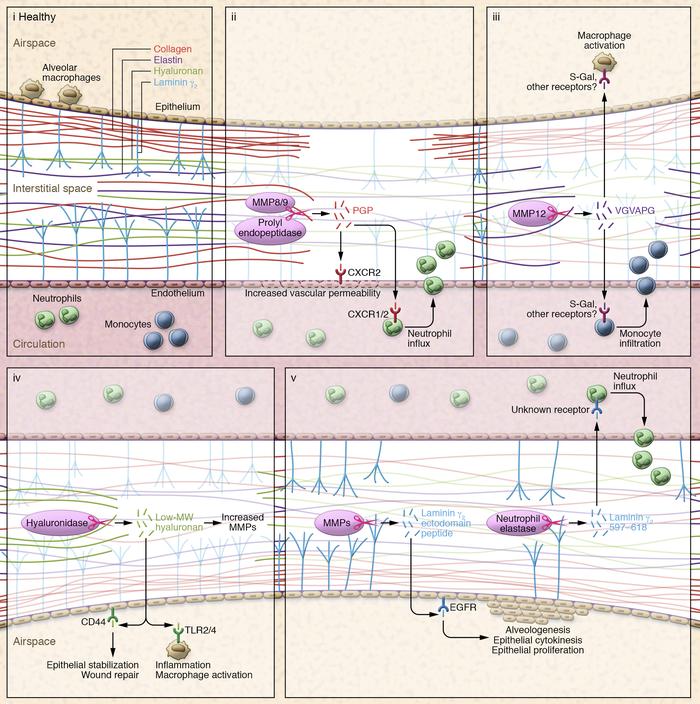 (i) ECM structural fibrous proteins collagen and elastin, the basement membrane integral protein laminin 332, and the glycosaminoglycan hyaluronan are all degraded by lytic enzymes to expose cryptic molecular fragments (matrikines), which activate signals on nearby cells to influence physiology. (ii) MMP9 and/or MMP8 cleave ECM collagen to form fragments that are further processed by prolyl endopeptidase to release PGP, which ligates CXCR1 and CXCR2 chemokine receptors to mediate neutrophil chemotaxis into the area of injury and increase vascular permeability. (iii) Elastin fragmentation, primarily mediated by MMP12, generates VGVAPG peptides, which are chemoattractant for monocytes and are proposed to act through the S-Gal receptor. (iv) HA within basement membranes is cleaved by hyaluronidase isoforms during tissue injury to release low–molecular weight, tissue-active HA, which ligates CD44 and TLRs on epithelial cells and leukocytes to invoke appropriate inflammatory and wound healing responses to injury and prevent excessive tissue remodeling and fibrosis. (v) Laminin 332 γ subunit in basement membranes is cleaved by multiple MMPs with release of the γ2 ectodomain peptide, an EGFR ligand that promotes epithelial proliferation to promote alveologenesis and tissue remodeling.