The incidence of cancer is higher in the elderly; however, many of the underlying mechanisms for this association remain unexplored. Here, we have shown that B cell progenitors in old mice exhibit marked signaling, gene expression, and metabolic defects. Moreover, B cell progenitors that developed from hematopoietic stem cells (HSCs) transferred from young mice into aged animals exhibited similar fitness defects. We further demonstrated that ectopic expression of the oncogenes , , or restored B cell progenitor fitness, leading to selection for oncogenically initiated cells and leukemogenesis specifically in the context of an aged hematopoietic system. Aging was associated with increased inflammation in the BM microenvironment, and induction of inflammation in young mice phenocopied aging-associated B lymphopoiesis. Conversely, a reduction of inflammation in aged mice via transgenic expression of α-1-antitrypsin or IL-37 preserved the function of B cell progenitors and prevented -mediated oncogenesis. We conclude that chronic inflammatory microenvironments in old age lead to reductions in the fitness of B cell progenitor populations. This reduced progenitor pool fitness engenders selection for cells harboring oncogenic mutations, in part due to their ability to correct aging-associated functional defects. Thus, modulation of inflammation — a common feature of aging — has the potential to limit aging-associated oncogenesis.

Induction of inflammation promotes functional decline in B progenitors. 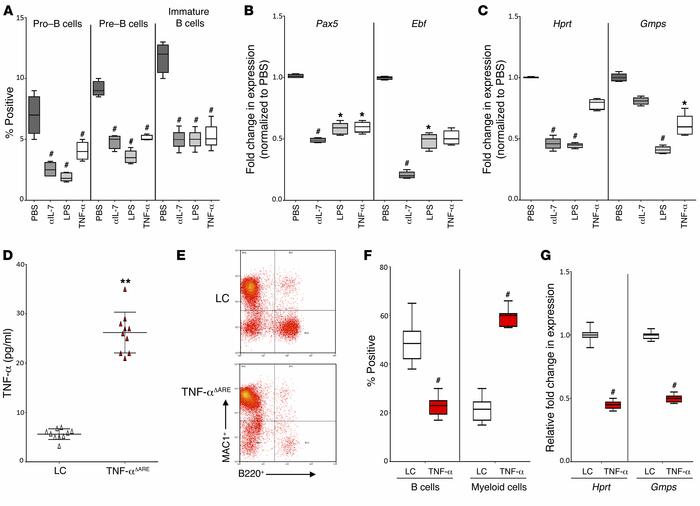 (–) Young mice were injected every 4 days for 2 weeks with PBS (vehicle), αIL-7–neutralizing Abs, LPS, or recombinant TNF-α. After 2 weeks of treatment (3 injections total), the mice were sacrificed and the percentage of B progenitors in the BM determined using flow cytometry. Expression levels of B lineage–specification genes () and purine synthesis genes () were determined using qPCR. Values in – represent the mean ± SEM for 5 mice per treatment group. (–) Serum TNF-α levels in 5-month-old TNF-αΔARE mice and their littermate controls were measured by ELISA (), frequencies of B cell (B220+) and myeloid (MAC1+) progenitor cells in BM were determined by flow cytometry ( and ), and mRNA levels of purine synthesis genes in pro–B cells were determined by qPCR (). Values represent the mean ± SEM of 3 independent experiments, with more than 9 mice per group. * < 0.05, ** < 0.01, and # < 0.001, by Student’s test relative to PBS-injected mice or littermate controls. LC, littermate control.