Physiochemical stress induces tissue injury as a result of the detection of abnormal molecular patterns by sensory molecules of the innate immune system. Here, we have described how the recently discovered C-type lectin collectin-11 (CL-11, also known as CL-K1 and encoded by ) recognizes an abnormal pattern of L-fucose on postischemic renal tubule cells and activates a destructive inflammatory response. We found that intrarenal expression of CL-11 rapidly increases in the postischemic period and colocalizes with complement deposited along the basolateral surface of the proximal renal tubule in association with L-fucose, the potential binding ligand for CL-11. Mice with either generalized or kidney-specific deficiency of CL-11 were strongly protected against loss of renal function and tubule injury due to reduced complement deposition. Ex vivo renal tubule cells showed a marked capacity for CL-11 binding that was induced by cell stress under hypoxic or hypothermic conditions and prevented by specific removal of L-fucose. Further analysis revealed that cell-bound CL-11 required the lectin complement pathway–associated protease MASP-2 to trigger complement deposition. Given these results, we conclude that lectin complement pathway activation triggered by ligand–CL-11 interaction in postischemic tissue is a potent source of acute kidney injury and is amenable to sugar-specific blockade.

Impact of CL-11 on renal injury induced by 50 minutes of ischemia. 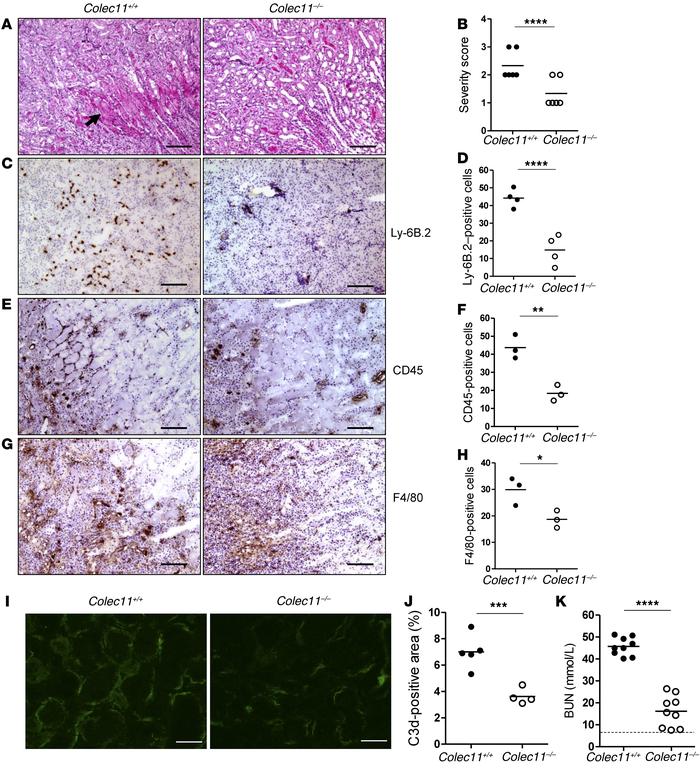