The production of high-affinity antibodies by B cells is essential for pathogen clearance. Antibody affinity for antigen is increased through the affinity maturation in germinal centers (GCs). This is an iterative process in which B cells cycle between proliferation coupled with the acquisition of mutations and antigen-based positive selection, resulting in retention of the highest-affinity B cell clones. The posttranscriptional regulator microRNA-155 (miR-155) is critical for efficient affinity maturation and the maintenance of the GCs; however, the cellular and molecular mechanism by which miR-155 regulates GC responses is not well understood. Here, we utilized a miR-155 reporter mouse strain and showed that miR-155 is coexpressed with the proto-oncogene encoding c-MYC in positively selected B cells. Functionally, miR-155 protected positively selected c-MYC+ B cells from apoptosis, allowing clonal expansion of this population, providing an explanation as to why deletion impairs affinity maturation and promotes the premature collapse of GCs. We determined that miR-155 directly inhibits the Jumonji family member JARID2, which enhances B cell apoptosis when overexpressed, and thereby promotes GC B cell survival. Our findings also suggest that there is cooperation between c-MYC and miR-155 during the normal GC response, a cooperation that may explain how c-MYC and miR-155 can collaboratively function as oncogenes. 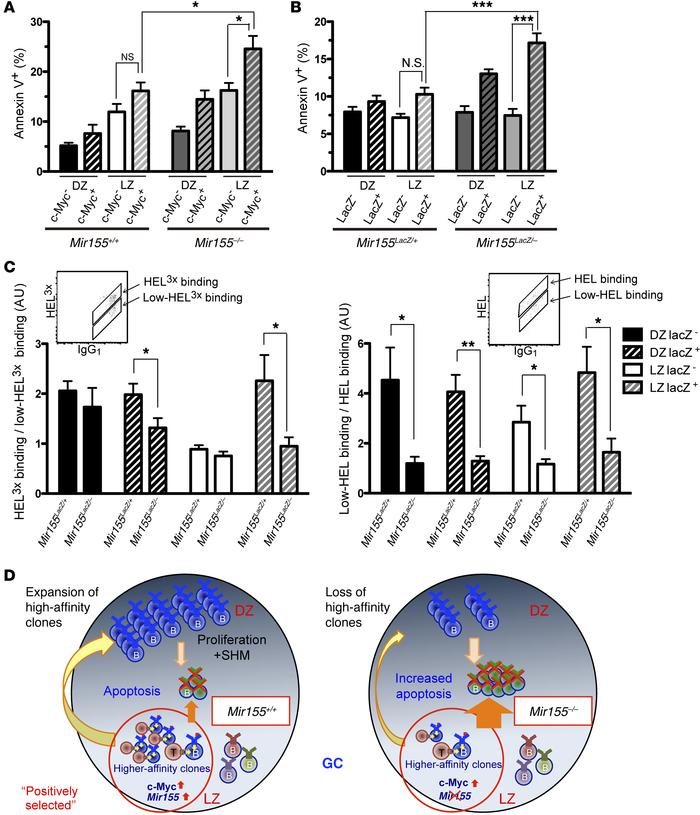