The production of high-affinity antibodies by B cells is essential for pathogen clearance. Antibody affinity for antigen is increased through the affinity maturation in germinal centers (GCs). This is an iterative process in which B cells cycle between proliferation coupled with the acquisition of mutations and antigen-based positive selection, resulting in retention of the highest-affinity B cell clones. The posttranscriptional regulator microRNA-155 (miR-155) is critical for efficient affinity maturation and the maintenance of the GCs; however, the cellular and molecular mechanism by which miR-155 regulates GC responses is not well understood. Here, we utilized a miR-155 reporter mouse strain and showed that miR-155 is coexpressed with the proto-oncogene encoding c-MYC in positively selected B cells. Functionally, miR-155 protected positively selected c-MYC+ B cells from apoptosis, allowing clonal expansion of this population, providing an explanation as to why deletion impairs affinity maturation and promotes the premature collapse of GCs. We determined that miR-155 directly inhibits the Jumonji family member JARID2, which enhances B cell apoptosis when overexpressed, and thereby promotes GC B cell survival. Our findings also suggest that there is cooperation between c-MYC and miR-155 during the normal GC response, a cooperation that may explain how c-MYC and miR-155 can collaboratively function as oncogenes.

miR-155 expression is associated with cell cycle progression of GC B cells. 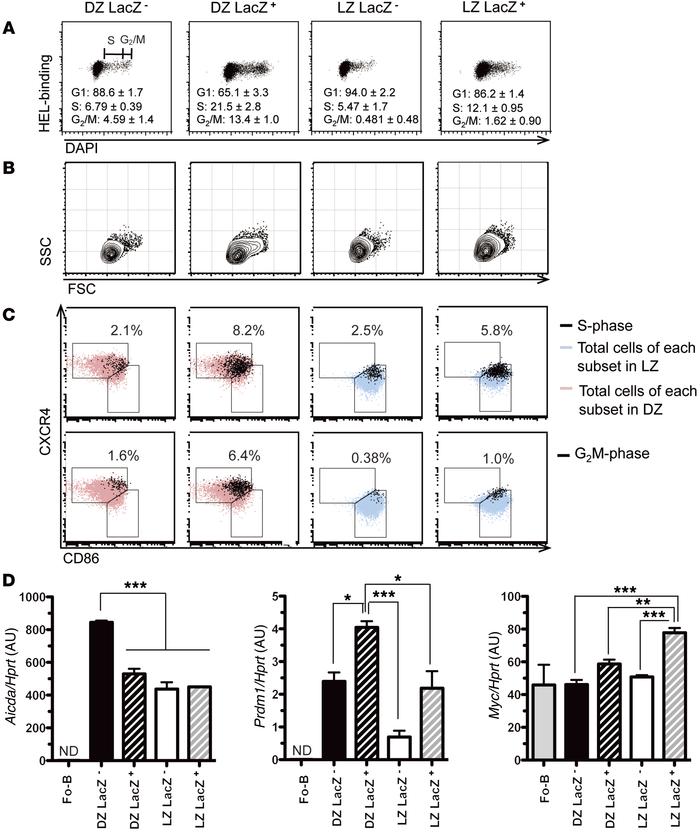 SWHEL B cells were adoptively transferred into CD45.1+ congenic recipient mice, which were then injected with HEL3X-SRBC and analyzed after 5 days. LacZ reporter staining is incompatible with permeabilization and, therefore, cells were sorted first using the strategy explained in . Subsequently, cell cycle was analyzed in the 4 subsets of GC B cells by DAPI staining. The mean of the indicated fraction ± SEM from 3 independent experiments is shown. () HEL-binding vs. DAPI. () Forward scatter (FSC) vs. side scatter (SSC). () S-phase and G2/M-phase B cells for each of the sorted subsets were gated as shown in . The upper panel shows the CXCR4/CD86 distribution of cells in S-phase cells (black dots) superimposed on DZ cells (pink) or LZ cells (light blue) of the indicated subset. The lower panel is similar to the upper panel, except that G2/M-phase cells (black) are shown. The percentage of black dots over total cell per gate is shown. A representative FACS plot of the indicated subset out of 3 independent experiments is shown (–). () The indicated subsets were sorted at day 5 after HEL3x-SRBC immunization. , , and transcripts levels were analyzed by qPCR and normalized by . Naive follicular B cells (Fo-B) were sorted as B220+AA4.1–CD21/35intCD23hi cells from 2 naive mice. The experiment shown is representative of 3 independent sorting experiments. In each experiment, cDNA was prepared from sorted cells after pooling 5–10 mice. The mean ± SEM is shown. * < 0.05, ** < 0.01, *** < 0.001 using 1-way ANOVA followed by a Tukey’s multiple comparisons post-test.