Wiskott-Aldrich syndrome (WAS) is an X-linked immunodeficiency characterized by microthrombocytopenia, eczema, and high susceptibility to developing tumors and autoimmunity. Recent evidence suggests that B cells may be key players in the pathogenesis of autoimmunity in WAS. Here, we assessed whether WAS protein deficiency (WASp deficiency) affects the establishment of B cell tolerance by testing the reactivity of recombinant antibodies isolated from single B cells from 4 WAS patients before and after gene therapy (GT). We found that pre-GT WASp-deficient B cells were hyperreactive to B cell receptor stimulation (BCR stimulation). This hyperreactivity correlated with decreased frequency of autoreactive new emigrant/transitional B cells exiting the BM, indicating that the BCR signaling threshold plays a major role in the regulation of central B cell tolerance. In contrast, mature naive B cells from WAS patients were enriched in self-reactive clones, revealing that peripheral B cell tolerance checkpoint dysfunction is associated with impaired suppressive function of WAS regulatory T cells. The introduction of functional WASp by GT corrected the alterations of both central and peripheral B cell tolerance checkpoints. We conclude that WASp plays an important role in the establishment and maintenance of B cell tolerance in humans and that restoration of WASp by GT is able to restore B cell tolerance in WAS patients.

WAS patients display a more stringent central B cell tolerance. 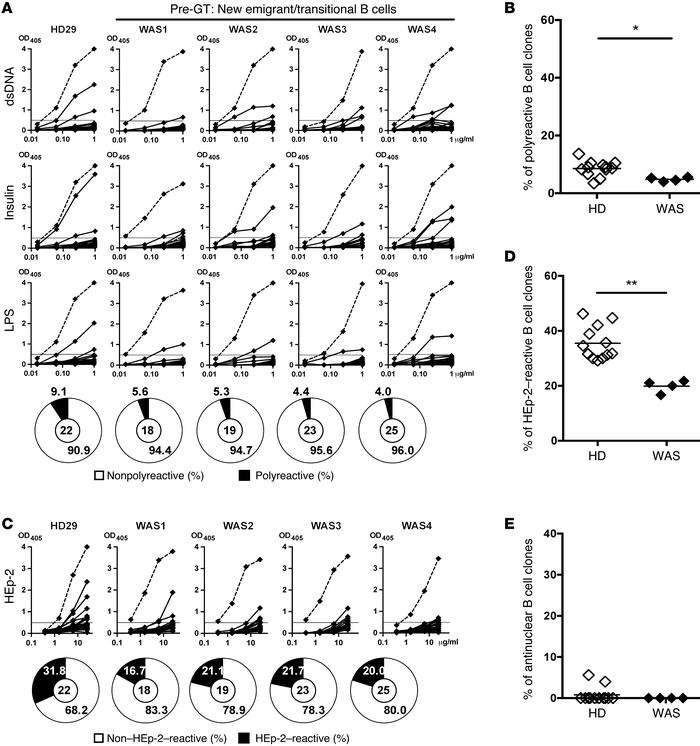 ( and ) Recombinant antibodies expressed by new emigrant/transitional (CD19+CD10+IgMhiCD21loCD27–) B cells from a representative HD (HD29) and 4 WAS patients were tested by ELISA for reactivity against dsDNA, insulin, LPS (), and HEp-2 lysate (). Antibodies were considered polyreactive when they recognized all 3 antigens in . Dotted lines show ED38+ control and horizontal lines define cutoff OD405 for positive reactivity. The frequencies of reactive and nonreactive clones are summarized in pie charts, with the total number of clones tested shown in the center. (, , and ) The frequencies of polyreactive (), HEp-2–reactive (), and antinuclear () new emigrant/transitional B cells are shown for HDs (open diamonds) and WAS patients (filled diamonds). Each symbol represents an individual, and horizontal bars display means. Differences were analyzed for statistical significance using Mann-Whitney test. * < 0.05 and ** < 0.01.