The small intestine is a dynamic and complex organ that is characterized by constant epithelium turnover and crosstalk among various cell types and the microbiota. Lymphatic capillaries of the small intestine, called lacteals, play key roles in dietary fat absorption and the gut immune response; however, little is known about the molecular regulation of lacteal function. Here, we performed a high-resolution analysis of the small intestinal stroma and determined that lacteals reside in a permanent regenerative, proliferative state that is distinct from embryonic lymphangiogenesis or quiescent lymphatic vessels observed in other tissues. We further demonstrated that this continuous regeneration process is mediated by Notch signaling and that the expression of the Notch ligand delta-like 4 (DLL4) in lacteals requires activation of VEGFR3 and VEGFR2. Moreover, genetic inactivation of in lymphatic endothelial cells led to lacteal regression and impaired dietary fat uptake. We propose that such a slow lymphatic regeneration mode is necessary to match a unique need of intestinal lymphatic vessels for both continuous maintenance, due to the constant exposure to dietary fat and mechanical strain, and efficient uptake of fat and immune cells. Our work reveals how lymphatic vessel responses are shaped by tissue specialization and uncover a role for continuous DLL4 signaling in the function of adult lymphatic vasculature.

DLL4 expression and Notch signaling are high in adult lacteals. 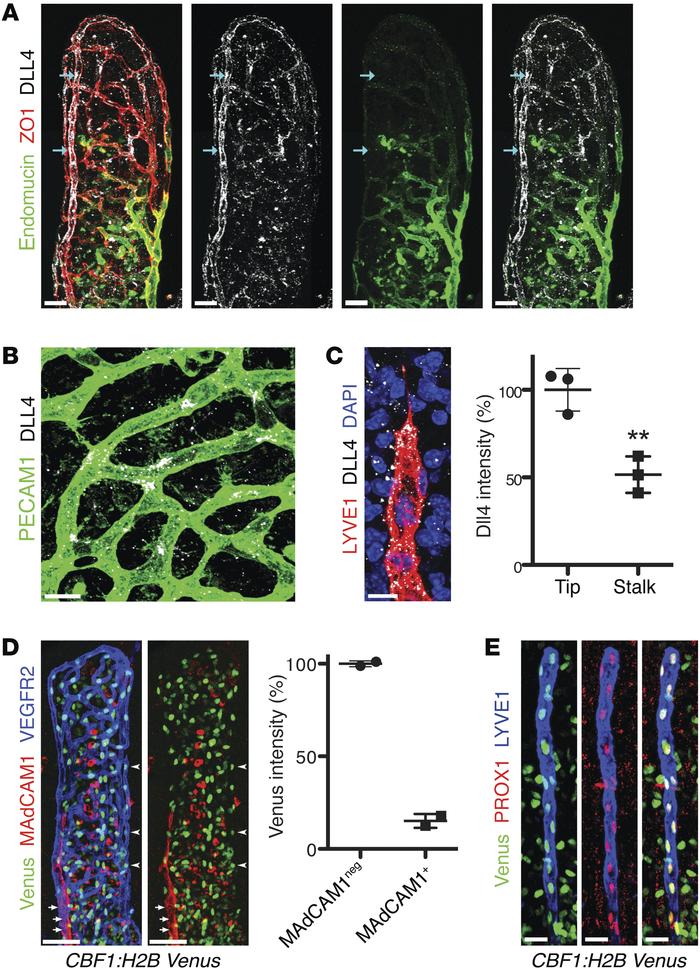