The immunoregulatory cytokine macrophage migration inhibitory factor (MIF) is encoded in a functionally polymorphic locus that is linked to the susceptibility of autoimmune and infectious diseases. The promoter contains a 4-nucleotide microsatellite polymorphism (–794 CATT) that repeats 5 to 8 times in the locus, with greater numbers of repeats associated with higher mRNA levels. Because there is no information about the transcriptional regulation of these common alleles, we used oligonucleotide affinity chromatography and liquid chromatography–mass spectrometry to identify nuclear proteins that interact with the –794 CATT5–8 site. An analysis of monocyte nuclear lysates revealed that the transcription factor ICBP90 (also known as UHRF1) is the major protein interacting with the microsatellite. We found that ICBP90 is essential for transcription from monocytes/macrophages, B and T lymphocytes, and synovial fibroblasts, and TLR-induced transcription is regulated in an ICBP90- and –794 CATT5–8 length–dependent manner. Whole-genome transcription analysis of ICBP90 shRNA–treated rheumatoid synoviocytes uncovered a subset of proinflammatory and immune response genes that overlapped with those regulated by MIF shRNA. In addition, the expression levels of ICBP90 and MIF were correlated in joint synovia from patients with rheumatoid arthritis. These findings identify ICBP90 as a key regulator of transcription and provide functional insight into the regulation of the polymorphic locus. 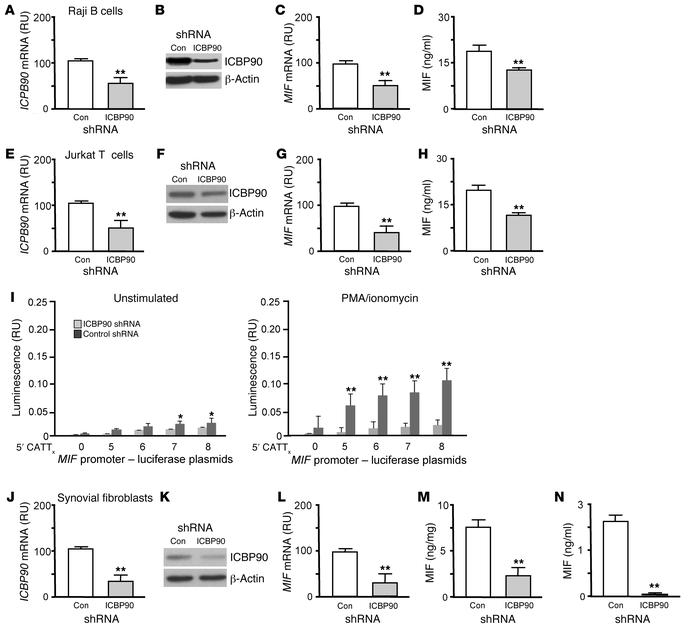