Type 1 diabetes (T1D) results from destruction of pancreatic β cells by autoreactive effector T cells. We hypothesized that the immunomodulatory drug alefacept would result in targeted quantitative and qualitative changes in effector T cells and prolonged preservation of endogenous insulin secretion by the remaining β cells in patients with newly diagnosed T1D.

In a multicenter, randomized, double-blind, placebo-controlled trial, we compared alefacept (two 12-week courses of 15 mg/wk i.m., separated by a 12-week pause) with placebo in patients with recent onset of T1D. Endpoints were assessed at 24 months and included meal-stimulated C-peptide AUC, insulin use, hypoglycemic events, and immunologic responses.

A total of 49 patients were enrolled. At 24 months, or 15 months after the last dose of alefacept, both the 4-hour and the 2-hour C-peptide AUCs were significantly greater in the treatment group than in the control group ( = 0.002 and 0.015, respectively). Exogenous insulin requirements were lower ( = 0.002) and rates of major hypoglycemic events were about 50% reduced ( < 0.001) in the alefacept group compared with placebo at 24 months. There was no apparent between-group difference in glycemic control or adverse events. Alefacept treatment depleted CD4+ and CD8+ central memory T cells (Tcm) and effector memory T cells (Tem) ( < 0.01), preserved Tregs, increased the ratios of Treg to Tem and Tcm ( < 0.01), and increased the percentage of PD-1+CD4+ Tem and Tcm ( < 0.01).

Changes in ratios of Tregs to memory T cells from baseline to 24 months in participants assigned to alefacept and placebo. 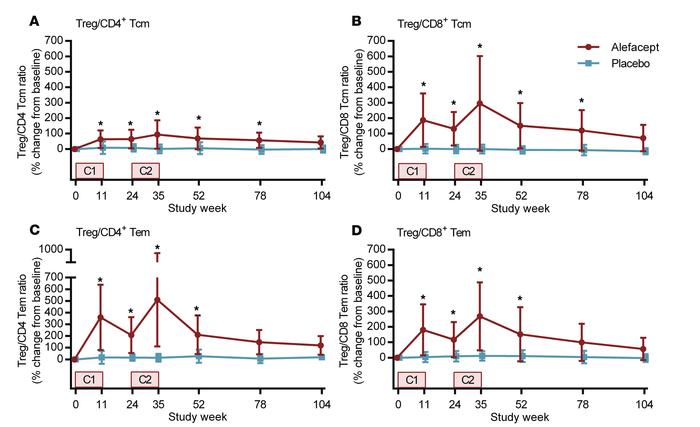 ( and ) Ratios of Tregs to CD4+ and CD8+ Tcm. ( and ) Ratios of Treg to CD4+ and CD8+ Tem cells. Flow populations and analyses are as described in and 6. Data are mean values ± SD presented as % change from baseline. * < 0.01. For all analyses, the number of evaluable subjects () at each time point is shown in . C1 and C2 denote the two 12-week treatment courses. For additional details, see .