Uterine leiomyomas are benign tumors that can cause pain, bleeding, and infertility in some women. Mediator complex subunit 12 () exon 2 variants are associated with uterine leiomyomas; however, the causality of variants, their genetic mode of action, and their role in genomic instability have not been established. Here, we generated a mouse model that conditionally expresses a missense variant (c.131G>A) in the uterus and demonstrated that this alteration alone promotes uterine leiomyoma formation and hyperplasia in both WT mice and animals harboring a uterine mesenchymal cell–specific deletion. Compared with WT animals, expression of c.131G>A in conditional –KO mice resulted in earlier onset of leiomyoma lesions that were also greater in size. Moreover, leiomyomatous, c.131G>A variant–expressing uteri developed chromosomal rearrangements. Together, our results show that the common human leiomyoma–associated MED12 variant can cause leiomyomas in mice via a gain of function that drives genomic instability, which is frequently observed in human leiomyomas. 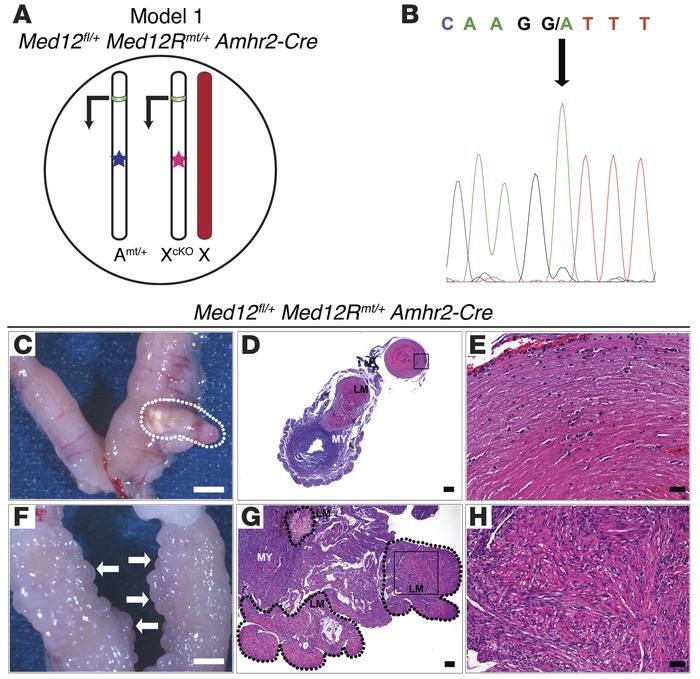 () Mouse model 1 ( ). A subset of cells express the c.131G>A variant from the autosomal locus, while X chromosome–derived will either be conditionally excised at 1 locus, or silenced by X chromosome inactivation at the other locus. Transcription from the mutant autosome (Amt/+) is indicated with an arrow, and the promoter region is depicted in green. The blue star indicates the c.131G>A variant. The pink star indicates the floxed allele on the X chromosome (Xcko), which, in the presence of , will lose exons 1–7. In the cells in which the floxed allele is inactivated, WT will be expressed. In cells with an active floxed allele, only mutant will be expressed. The red chromosome indicates the inactivated X chromosome. () cDNA sequencing from tumor tissue showing the presence of the mutant c.131G>A variant (green chromatogram peak, black arrow) in the absence of the WT allele, consistent with the monoclonal composition of tumor cells. () Eighteen-week-old multiparous uterus revealed a 4-mm tumorous lesion (outlined by white dotted lines). () Histological examination confirmed the presence of a large leiomyoma nodule growing from the smooth muscle layer of the uterus. A higher-magnification image of the black-boxed neoplastic area appears in and shows the presence of fascicles with plump spindle cells, eosinophilic cytoplasm, and ECM deposits. () Twenty-four-week-old multiparous female uterus showing multiple nodules (white arrows). () Multiple leiomyoma nodules are outlined by black dotted lines, and the black box, shown at higher magnification in , highlights fibrosis and ECM deposition. Approximately 80% (16 of 20 females) of the uteri exhibited leiomyoma-like lesions and hyperplasia. LM, leiomyoma; ES, endometrial stroma; MY, myometrium. Scale bars: 2,000 μm ( and ), 1,000 μm (), 500 μm (), 100 μm (), 50 μm ().