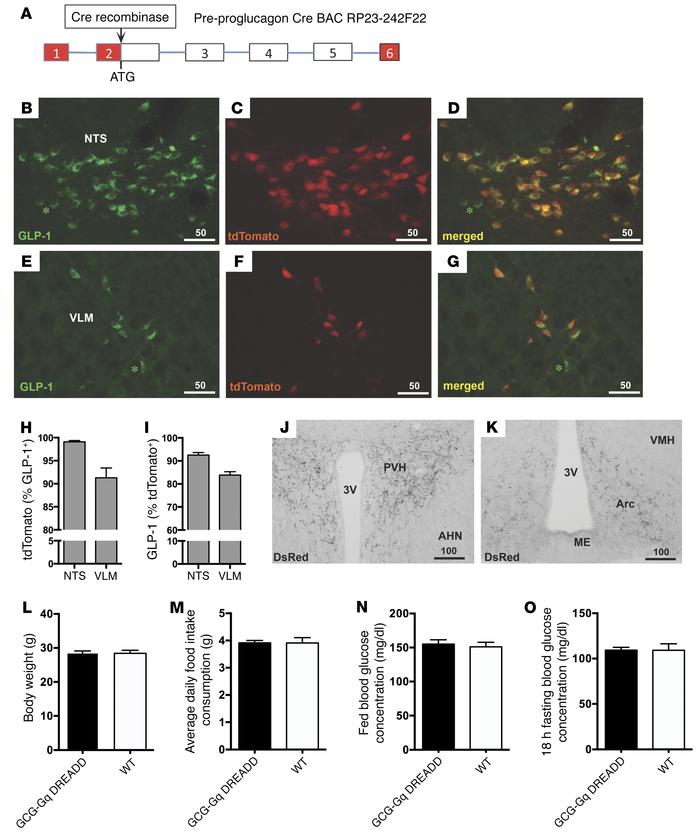 () Cre recombinase was inserted into the gene locus of BAC RP23-242F22 at the ATG start codon. Red boxes, 5′ and 3′ untranslated regions; white boxes, exons; lines, intronic DNA. (–) Cre recombinase expression within GCG neurons was visualized by crossing mice with tdTomato reporter animals. tdTomato fluorescence (NTS in ; VLM in ) is restricted to GLP-1–expressing cells ( and ) in the NTS () and the VLM (). Specificity of Cre recombinase expression is high, with virtually all tdTomato-labeled cells in the NTS (99%) and more than 92% in the VLM showing GLP-1 immunofluorescence (). The majority of GLP-1–labeled neurons show Cre recombinase activity, with efficacy ranging from 84% in the VLM to 93% in the NTS (). The few GLP-1–positive neurons that lack tdTomato signal are marked with green asterisks (in , , , and ). ( and ) PVH and arcuate nuclei (Arc) neurons did not show expression, but tdTomato-labeled axons and terminals originating from brainstem GCG neurons were readily observed. AHE, anterior hypothalamic nucleus; ME, median eminence. (–) GCG-Gq DREADD transgenic mice exhibit normal body weight (), daily chow food intake (), and normal fed () and fasting () glucose levels. Scale bars in –, , and are in micrometers.