Mitochondria are a distinguishing feature of eukaryotic cells. Best known for their critical function in energy production via oxidative phosphorylation (OXPHOS), mitochondria are essential for nutrient and oxygen sensing and for the regulation of critical cellular processes, including cell death and inflammation. Such diverse functional roles for organelles that were once thought to be simple may be attributed to their distinct heteroplasmic genome, exclusive maternal lineage of inheritance, and ability to generate signals to communicate with other cellular organelles. Mitochondria are now thought of as one of the cell’s most sophisticated and dynamic responsive sensing systems. Specific signatures of mitochondrial dysfunction that are associated with disease pathogenesis and/or progression are becoming increasingly important. In particular, the centrality of mitochondria in the pathological processes and clinical phenotypes associated with a range of lung diseases is emerging. Understanding the molecular mechanisms regulating the mitochondrial processes of lung cells will help to better define phenotypes and clinical manifestations associated with respiratory disease and to identify potential diagnostic and therapeutic targets. 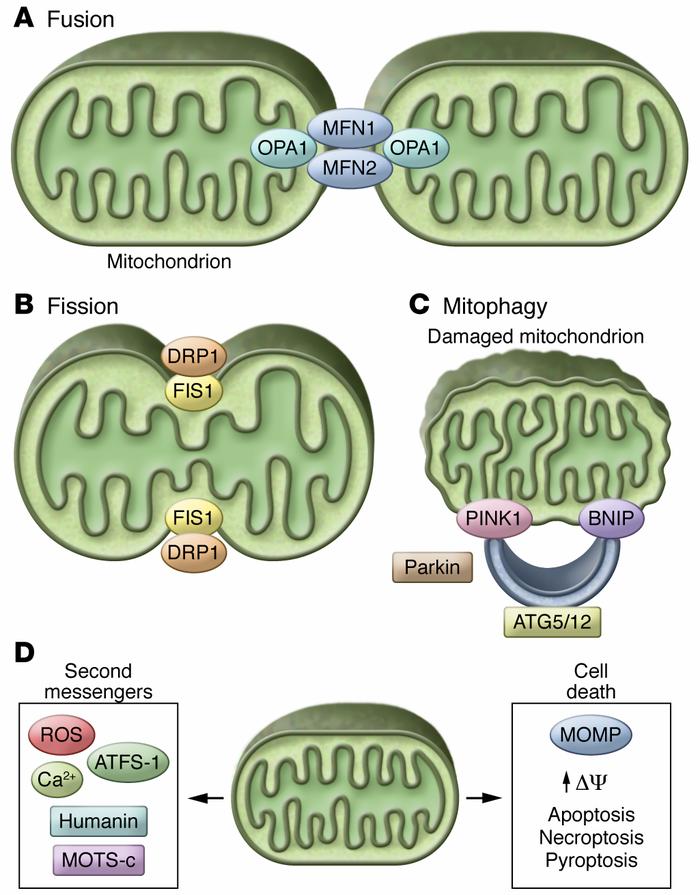 Mitochondrial biogenesis and mitophagy allow cells to quickly replace metabolically dysfunctional mitochondria with fresh, undamaged organelles. () Mitochondrial fusion is mediated by the dynamin-related GTPases MFN1 and MFN2 at the OMM and by OPA1 in the IMM. () Mitochondrial fission requires the recruitment of DRP1 from the cytosol to receptors on the OIMM (FIS1, MFF, MID49, and MID51), which causes constriction of the mitochondria and eventual division of the organelle in two. () Metabolically active cells, such as type II AECs, have developed robust programs to maintain mitochondrial quality. Damaged or defective mitochondria are removed via mitophagy, which is regulated by PINK1, BNIP, Parkin, and ATG5/12. ()Mitochondrial-derived second messengers trigger a series of stress response pathways that provide both short-term and long-term benefits in increased stress resistance and longevity. However, excessive activation of these pathways may ultimately become detrimental to the cell, leading to the activation of programmed cell death pathways, including apoptosis, necroptosis, and pyroptosis.