A high intake of dietary salt (NaCl) has been implicated in the development of hypertension, chronic inflammation, and autoimmune diseases. We have recently shown that salt has a proinflammatory effect and boosts the activation of Th17 cells and the activation of classical, LPS-induced macrophages (M1). Here, we examined how the activation of alternative (M2) macrophages is affected by salt. In stark contrast to Th17 cells and M1 macrophages, high salt blunted the alternative activation of BM-derived mouse macrophages stimulated with IL-4 and IL-13, M(IL-4+IL-13) macrophages. Salt-induced reduction of M(IL-4+IL-13) activation was not associated with increased polarization toward a proinflammatory M1 phenotype. In vitro, high salt decreased the ability of M(IL-4+IL-13) macrophages to suppress effector T cell proliferation. Moreover, mice fed a high salt diet exhibited reduced M2 activation following chitin injection and delayed wound healing compared with control animals. We further identified a high salt–induced reduction in glycolysis and mitochondrial metabolic output, coupled with blunted AKT and mTOR signaling, which indicates a mechanism by which NaCl inhibits full M2 macrophage activation. Collectively, this study provides evidence that high salt reduces noninflammatory innate immune cell activation and may thus lead to an overall imbalance in immune homeostasis. 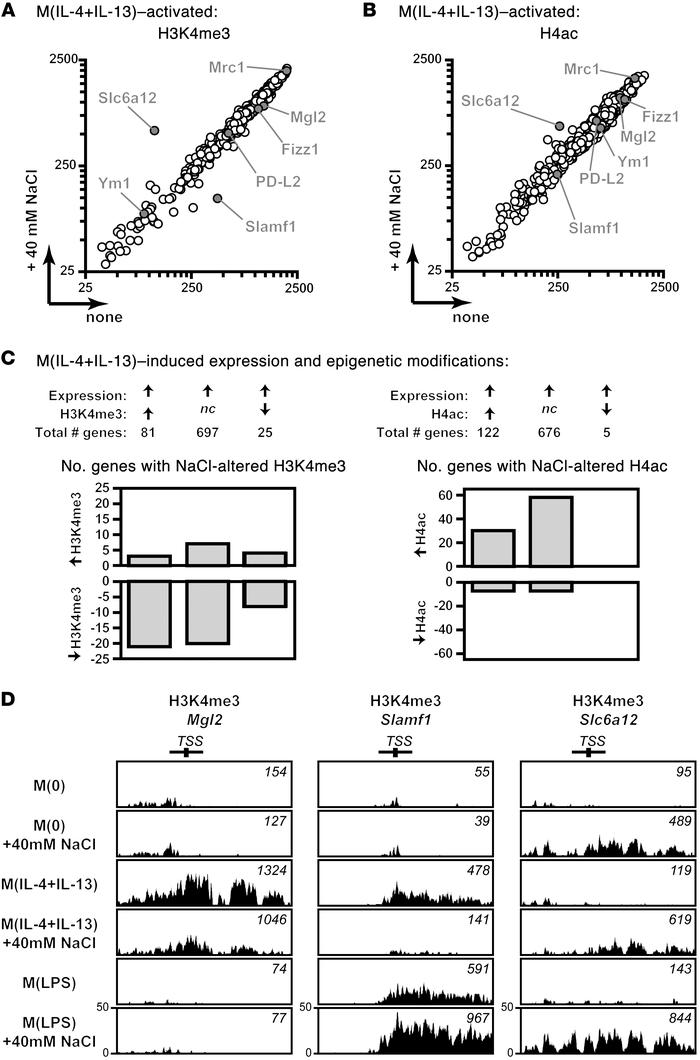 ( and ) ChIP-seq was performed to identify the effect of salt on transcriptionally activating epigenetic modifications upon M(IL-4+IL-13) induction. Only genes that had a corresponding increased gene expression upon M(IL-4+IL-13) activation were analyzed further. The H3K4me3 () and H4ac () marks (counts) upon activation to M(IL-4+IL-13) in the absence (none) or presence of 40 mM NaCl is presented. M(IL-4+IL-13) signature genes analyzed in and are indicated on each graph. A single technical replicate was generated for each group, which was repeated in 2 independent experiments and then pooled (total of = 2). () Summary of the effect of M(IL-4+IL-13) activation on genes with an increased expression and either a concordant increase (>1.3-fold), no change (nc), or decrease (<0.7-fold) in H3K4me3 and H4ac chromatin marks. The number of genes that were changed (>1.2-fold) upon activation in the presence of an additional 40 mM NaCl is shown. = 2 (biological). () Representative H3K4me3 counts around the promoter region of M(IL-4+IL-13) signature genes and , and the tonicity responsive molecule . The total H3K4me3 counts were normalized by library size.