Alterations in chromatin modifications, such as histone methylation, have been suggested as mediating chemotherapy resistance in several cancer types; therefore, elucidation of the epigenetic mechanisms that underlie drug resistance may greatly contribute to the advancement of cancer therapies. In the present study, we identified histone H3–lysine 27 (H3K27) as a critical residue for epigenetic modification in multiple myeloma. We determined that abrogation of drug-induced H3K27 hypermethylation is associated with cell adhesion–mediated drug resistance (CAM-DR), which is the most important form of drug resistance, using a coculture system to evaluate stroma cell adhesion–dependent alterations in multiple myeloma cells. Cell adhesion counteracted anticancer drug–induced hypermethylation of H3K27 via inactivating phosphorylation of the transcription regulator EZH2 at serine 21, leading to the sustained expression of antiapoptotic genes, including , B cell CLL/lymphoma 2 (), and hypoxia inducible factor 1, α subunit (). Pharmacological and genetic inhibition of the IGF-1R/PI3K/AKT pathway reversed CAM-DR by promoting EZH2 dephosphorylation and H3K27 hypermethylation both in vitro and in refractory murine myeloma models. Together, our findings identify and characterize an epigenetic mechanism that underlies CAM-DR and suggest that kinase inhibitors to counteract EZH2 phosphorylation should be included in combination chemotherapy to increase therapeutic index. 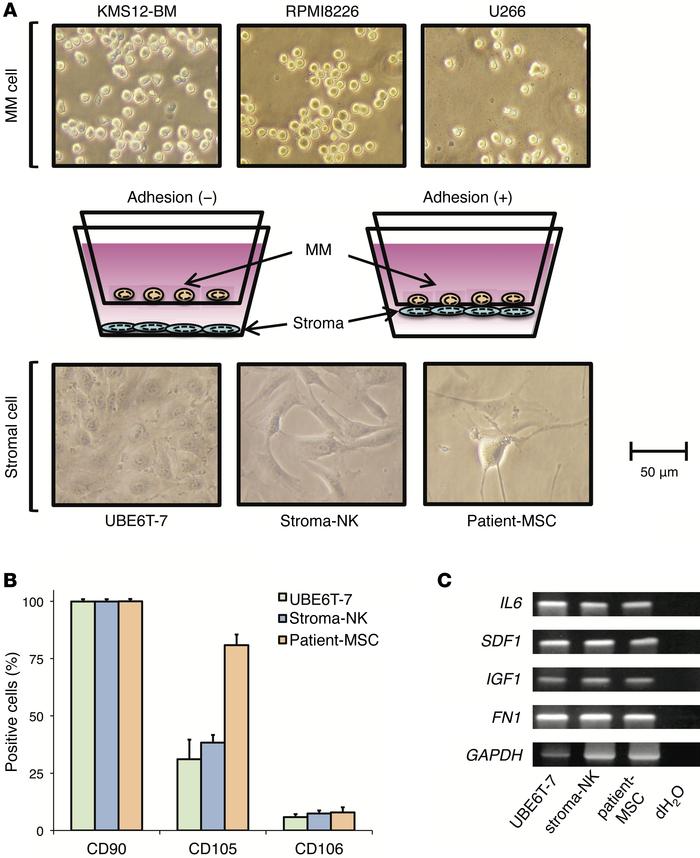 () Diagram of the culture system used in the present study. See Methods for a detailed description of the procedure. () Flow cytometric analysis of the expression of BMSC markers on UBE6T-7, stroma-NK, and MM patient–derived MSCs (patient-MSC). Means ± SD of 3 independent experiments are shown. () Total cellular RNA was isolated from the indicated cells and subjected to semi-quantitative RT-PCR analysis for the expression of , , , , and (internal control), using primers listed in . PCR without cDNA serves as a negative control (dH2O). The results of suboptimal amplification cycles (35 cycles) are shown. Detailed procedures are described in .