Valproic acid (VPA) has been widely used for decades to treat epilepsy; however, its mechanism of action remains poorly understood. Here, we report that the anticonvulsant effects of nonacute VPA treatment involve preservation of the M-current, a low-threshold noninactivating potassium current, during seizures. In a wide variety of neurons, activation of Gq-coupled receptors, such as the m1 muscarinic acetylcholine receptor, suppresses the M-current and induces hyperexcitability. We demonstrated that VPA treatment disrupts muscarinic suppression of the M-current and prevents resultant agonist-induced neuronal hyperexcitability. We also determined that VPA treatment interferes with M-channel signaling by inhibiting palmitoylation of a signaling scaffold protein, AKAP79/150, in cultured neurons. In a kainate-induced murine seizure model, administration of a dose of an M-channel inhibitor that did not affect kainate-induced seizure transiently eliminated the anticonvulsant effects of VPA. Retigabine, an M-channel opener that does not open receptor-suppressed M-channels, provided anticonvulsant effects only when administered prior to seizure induction in control animals. In contrast, treatment of VPA-treated mice with retigabine induced anticonvulsant effects even when administered after seizure induction. Together, these results suggest that receptor-induced M-current suppression plays a role in the pathophysiology of seizures and that preservation of the M-current during seizures has potential as an effective therapeutic strategy. 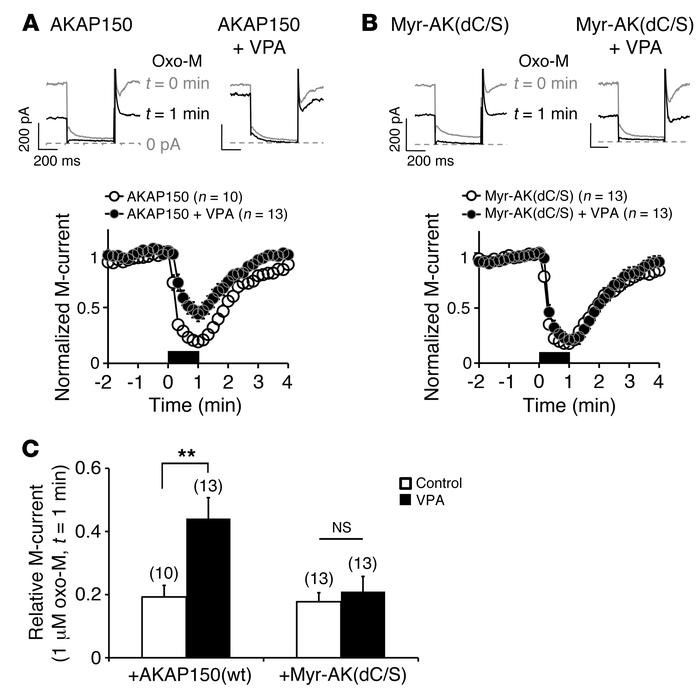