Lung transplantation is the only viable option for patients suffering from otherwise incurable end-stage pulmonary diseases such as chronic obstructive pulmonary disease and idiopathic pulmonary fibrosis. Despite aggressive immunosuppression, acute rejection of the lung allograft occurs in over half of transplant recipients, and the factors that promote lung acceptance are poorly understood. The contribution of lymphatic vessels to transplant pathophysiology remains controversial, and data that directly address the exact roles of lymphatic vessels in lung allograft function and survival are limited. Here, we have shown that there is a marked decline in the density of lymphatic vessels, accompanied by accumulation of low-MW hyaluronan (HA) in mouse orthotopic allografts undergoing rejection. We found that stimulation of lymphangiogenesis with VEGF-C156S, a mutant form of VEGF-C with selective VEGFR-3 binding, alleviates an established rejection response and improves clearance of HA from the lung allograft. Longitudinal analysis of transbronchial biopsies from human lung transplant recipients demonstrated an association between resolution of acute lung rejection and decreased HA in the graft tissue. Taken together, these results indicate that lymphatic vessel formation after lung transplantation mediates HA drainage and suggest that treatments to stimulate lymphangiogenesis have promise for improving graft outcomes. 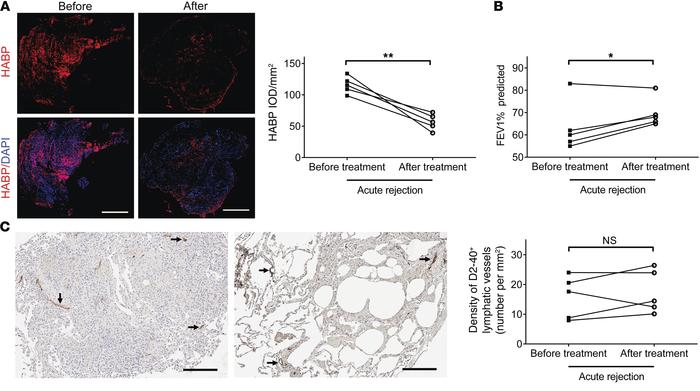