In mammals, the outflow tract (OFT) of the developing heart septates into the base of the pulmonary artery and aorta to guide deoxygenated right ventricular blood into the lungs and oxygenated left ventricular blood into the systemic circulation. Accordingly, defective OFT septation is a life-threatening condition that can occur in both syndromic and nonsyndromic congenital heart disease. Even though studies of genetic mouse models have previously revealed a requirement for VEGF-A, the class 3 semaphorin SEMA3C, and their shared receptor neuropilin 1 (NRP1) in OFT development, the precise mechanism by which these proteins orchestrate OFT septation is not yet understood. Here, we have analyzed a complementary set of ligand-specific and tissue-specific mouse mutants to show that neural crest–derived SEMA3C activates NRP1 in the OFT endothelium. Explant assays combined with gene-expression studies and lineage tracing further demonstrated that this signaling pathway promotes an endothelial-to-mesenchymal transition that supplies cells to the endocardial cushions and repositions cardiac neural crest cells (NCCs) within the OFT, 2 processes that are essential for septal bridge formation. These findings elucidate a mechanism by which NCCs cooperate with endothelial cells in the developing OFT to enable the postnatal separation of the pulmonary and systemic circulation. 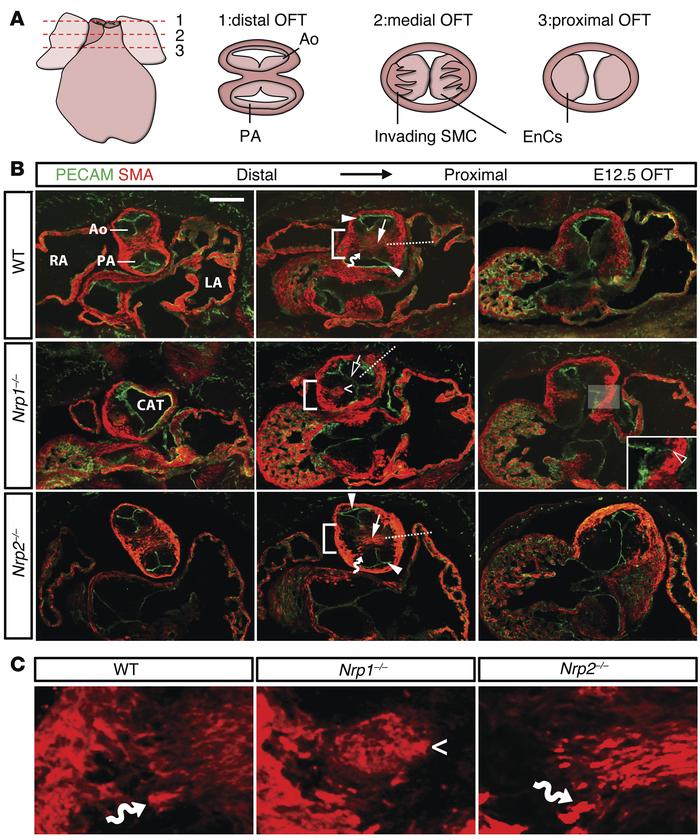