Constitutively active MYC and reactivated telomerase often coexist in cancers. While reactivation of telomerase is thought to be essential for replicative immortality, MYC, in conjunction with cofactors, confers several growth advantages to cancer cells. It is known that the reactivation of TERT, the catalytic subunit of telomerase, is limiting for reconstituting telomerase activity in tumors. However, while reactivation of TERT has been functionally linked to the acquisition of several “hallmarks of cancer” in tumors, the molecular mechanisms by which this occurs and whether these mechanisms are distinct from the role of telomerase on telomeres is not clear. Here, we demonstrated that first-generation TERT-null mice, unlike -null mice, show delayed onset of MYC-induced lymphomagenesis. We further determined that TERT is a regulator of MYC stability in cancer. TERT stabilized MYC levels on chromatin, contributing to either activation or repression of its target genes. TERT regulated MYC ubiquitination and proteasomal degradation, and this effect of TERT was independent of its reverse transcriptase activity and role in telomere elongation. Based on these data, we conclude that reactivation of TERT, a direct transcriptional MYC target in tumors, provides a feed-forward mechanism to potentiate MYC-dependent oncogenesis.

Effect of acute depletion of TERT on MYC-driven lymphomas in vivo. 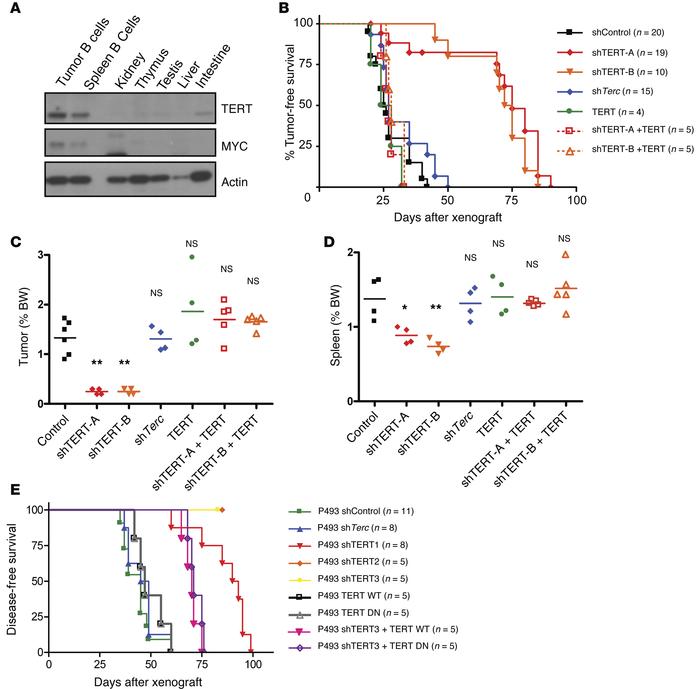