Kidney size adaptively increases as mammals grow and in response to the loss of 1 kidney. It is not clear how kidneys size themselves or if the processes that adapt kidney mass to lean body mass also mediate renal hypertrophy following unilateral nephrectomy (UNX). Here, we demonstrated that mice harboring a proximal tubule–specific deletion of () have greatly enlarged kidneys as the result of persistent activation of the class I PI3K/mTORC2/AKT pathway and an increase of the antiproliferative signals p21Cip1/WAF and p27Kip1. Administration of rapamycin to mice diminished hypertrophy. Proximal tubule–specific deletion of in mice also attenuated class I PI3K/mTORC2/AKT signaling and reduced the size of enlarged kidneys. In mice, UNX further increased mTORC1 activation and hypertrophy in the remaining kidney; however, mTORC2-dependent AKT phosphorylation did not increase further in the remaining kidney of mice, nor was it induced in the remaining kidney of WT mice. After UNX, renal blood flow and amino acid delivery to the remaining kidney rose abruptly, followed by increased amino acid content and activation of a class III PI3K/mTORC1/S6K1 pathway. Thus, our findings demonstrate context-dependent roles for EGFR-modulated class I PI3K/mTORC2/AKT signaling in the normal adaptation of kidney size and PTEN-independent, nutrient-dependent class III PI3K/mTORC1/S6K1 signaling in the compensatory enlargement of the remaining kidney following UNX. 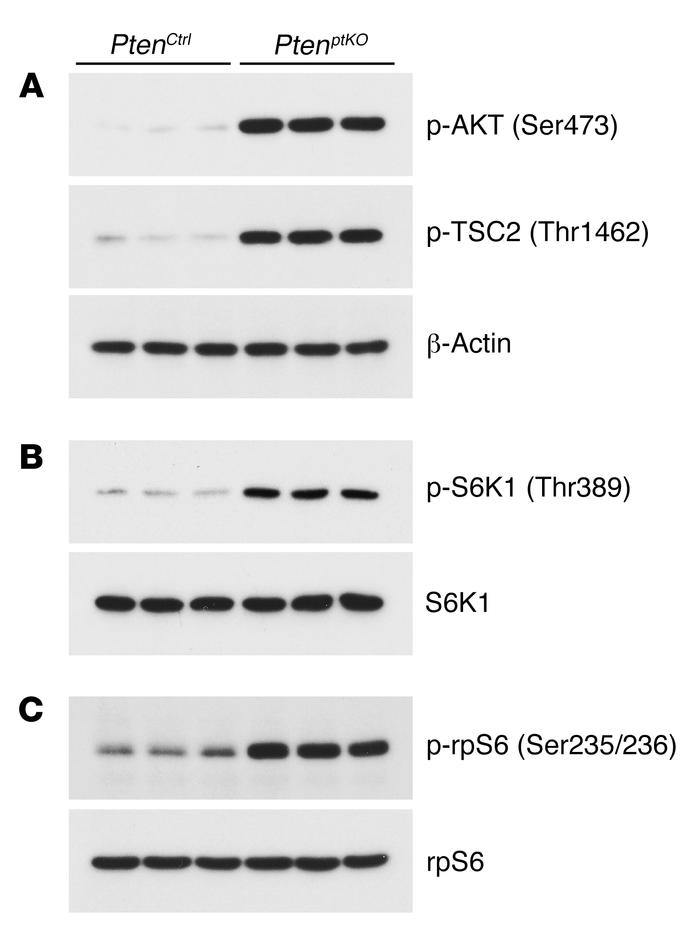 and mice were sacrificed at 9 weeks of age, and their kidney lysates were subjected to immunoblot analysis with the indicated phospho-specific antibodies (–, top and middle panels), followed by stripping and reprobing of the same blot in each subset of – with an antibody against β-actin (, bottom) or against the corresponding total proteins ( and , bottom) to ensure equal loading. Each lane represents 1 sample from the left kidney of an individual mouse. Shown are representative blots for 5 mice per genotype group with similar results.