Tau is a highly abundant and multifunctional brain protein that accumulates in neurofibrillary tangles (NFTs), most commonly in Alzheimer’s disease (AD) and primary age-related tauopathy. Recently, microRNAs (miRNAs) have been linked to neurodegeneration; however, it is not clear whether miRNA dysregulation contributes to tau neurotoxicity. Here, we determined that the highly conserved brain miRNA miR-219 is downregulated in brain tissue taken at autopsy from patients with AD and from those with severe primary age-related tauopathy. In a model that produces human tau, reduction of miR-219 exacerbated tau toxicity, while overexpression of miR-219 partially abrogated toxic effects. Moreover, we observed a bidirectional modulation of tau levels in the model that was dependent on miR-219 expression or neutralization, demonstrating that miR-219 regulates tau in vivo. In mammalian cellular models, we found that miR-219 binds directly to the 3′-UTR of the tau mRNA and represses tau synthesis at the post-transcriptional level. Together, our data indicate that silencing of tau by miR-219 is an ancient regulatory mechanism that may become perturbed during neurofibrillary degeneration and suggest that this regulatory pathway may be useful for developing therapeutics for tauopathies.

In vivo regulation of tau toxicity and expression by miR-219. 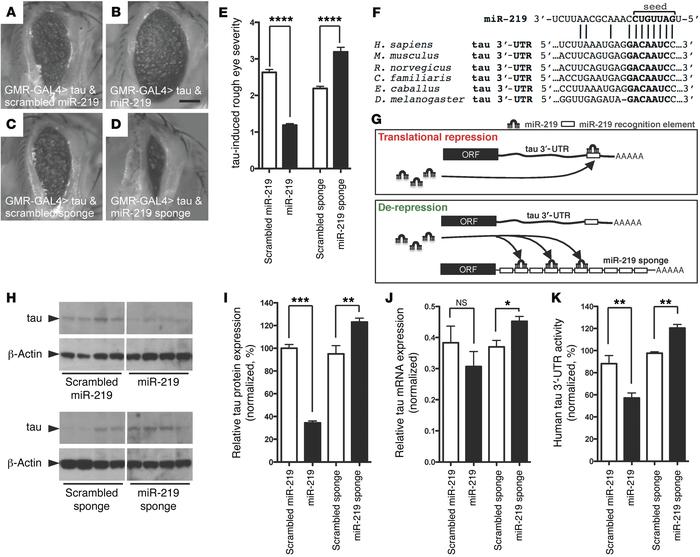