Pouring fuel on the fire: Th17 cells, the environment, and autoimmunity

Pouring fuel on the fire: Th17 cells, the environment, and autoimmunity

Cytokines play a critical role in controlling the differentiation of CD4 Th cells into distinct subsets, including IL-17–producing Th17 cells. Unfortunately, the incidence of a number of autoimmune diseases, particularly those in which the IL-23/IL-17 axis has been implicated, has risen in the last several decades, suggesting that environmental factors can promote autoimmunity. Here we review the role of cytokines in Th17 differentiation, particularly the role of IL-23 in promoting the differentiation of a pathogenic subset of Th17 cells that potently induce autoimmune tissue inflammation. Moreover, we highlight emerging data that indicate that environmental factors, including the intestinal microbiota and changes in diet, can alter normal cytokine regulation with potent effects on Th17 differentiation and thus promote autoimmunity, which has strong implications for human disease. 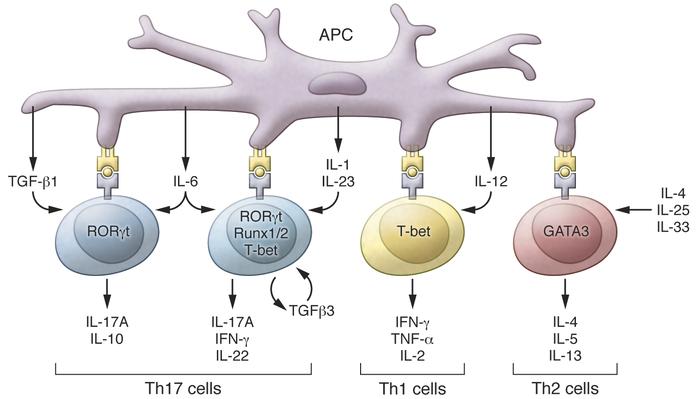 The subsets of effector Th cells are shown, along with the cytokines that drive their differentiation, lineage-defining transcription factors, and the cytokines they produce. Within the Th17 subset, two distinct subtypes of cells have been described with differing abilities to induce autoimmunity: a pathogenic subtype that produces both IL-17 and IFN-γ and a nonpathogenic subtype that produces IL-17 and IL-10.