Checkpoints that control B cell development

Checkpoints that control B cell development

B cells differentiate from pluripotent hematopoietic stem cells (pHSCs) in a series of distinct stages. During early embryonic development, pHSCs migrate into the fetal liver, where they develop and mature to B cells in a transient wave, which preferentially populates epithelia and lung as well as gut-associated lymphoid tissues. This is followed by continuous B cell development throughout life in the bone marrow to immature B cells that migrate to secondary lymphoid tissues, where they mature. At early stages of development, before B cell maturation, the gene loci encoding the heavy and light chains of immunoglobulin that determine the B cell receptor composition undergo stepwise rearrangements of variable region-encoding gene segments. Throughout life, these gene rearrangements continuously generate B cell repertoires capable of recognizing a plethora of self-antigens and non–self-antigens. The microenvironment in which these B cell repertoires develop provide signaling molecules that play critical roles in promoting gene rearrangements, proliferation, survival, or apoptosis, and that help to distinguish self-reactive from non–self-reactive B cells at four distinct checkpoints. This refinement of the B cell repertoire directly contributes to immunity, and defects in the process contribute to autoimmune disease.

B cell development in fetal liver and bone marrow. 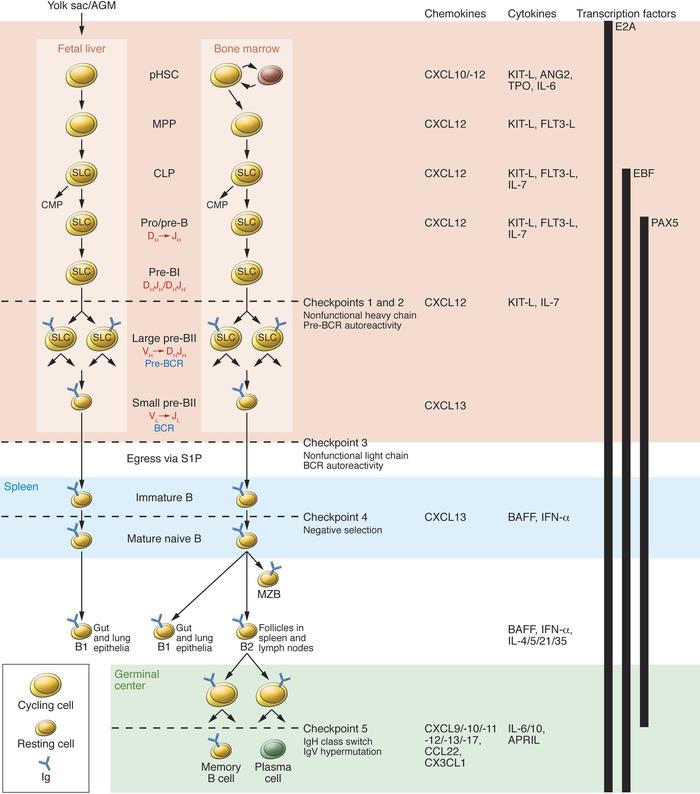 pHSC progenitors originate extraembyronically from yolk sac and, at later stages of development, intraembyronically from the aorta-gonad-mesonephros (AGM) region. pHSCs develop in the fetal liver prenatally and in bone marrow postnatally; both of these environments (pink region) provide crucial transcription factors, chemokines, cytokines, and cell contacts that regulate differentiation. Additionally, pHSCs localize to specialized niches that allow for their long-term survival in bone marrow but not in fetal liver. Expression of the transcription factor E2A and the V(D)J rearrangement machinery RAG1/2 restricts CLPs from developing into B lineage cells. BCRs are generated by stepwise rearrangements of Ig segments. Pre-B cells that have undergone productive VHDHJH rearrangement express an Igμ chain that can pair with SLC to form a pre-BCR, which stimulates large pre-B cell proliferation. Lastly, VL-to-JL rearrangement occurs in small pre-BII cells, which become surface BCR–expressing immature B cells. They then enter the spleen (blue region), where fetal liver–derived BI cells predominately populate the gut and lung epithelia as mature B cells. Bone marrow–derived B cells mature in spleen to BI cells, which populate the lung and epithelia; MZB cells, which populate the marginal zone; and BII cells, which are organized in B cell-rich follicles where T cell-dependent antigenic stimulation promotes development of germinal centers (green region). Antigen-specific follicular helper T cells induce B cell Ig class switching and IgV-region hypermutation and help to develop memory B cells and plasma cells. The developing B cell repertoires are monitored for structural fitness and autoreactivity at five checkpoints. CMP, common myeloid progenitor.