Immunosurveillance and therapy of multiple myeloma are CD226 dependent

Immunosurveillance and therapy of multiple myeloma are CD226 dependent

Multiple myeloma (MM) is an age-dependent hematological malignancy. Evaluation of immune interactions that drive MM relies on in vitro experiments that do not reflect the complex cellular stroma involved in MM pathogenesis. Here we used Vk*MYC transgenic mice, which spontaneously develop MM, and demonstrated that the immune system plays a critical role in the control of MM progression and the response to treatment. We monitored Vk*MYC mice that had been crossed with mutant mice over a period of 3 years and found that CD226 limits spontaneous MM development. The CD226-dependent anti-myeloma immune response against transplanted Vk*MYC MM cells was mediated both by NK and CD8+ T cells through perforin and IFN-γ pathways. Moreover, CD226 expression was required for optimal antimyeloma efficacy of cyclophosphamide (CTX) and bortezomib (Btz), which are both standardly used to manage MM in patients. Activation of costimulatory receptor CD137 with mAb (4-1BB) exerted strong antimyeloma activity, while inhibition of coinhibitory receptors PD-1 and CTLA-4 had no effect. Taken together, the results of this study provide in vivo evidence that CD226 is important for MM immunosurveillance and indicate that specific immune components should be targeted for optimal MM treatment efficacy. As progressive immunosuppression associates with MM development, strategies aimed to increase immune functions may have important therapeutic implications in MM. 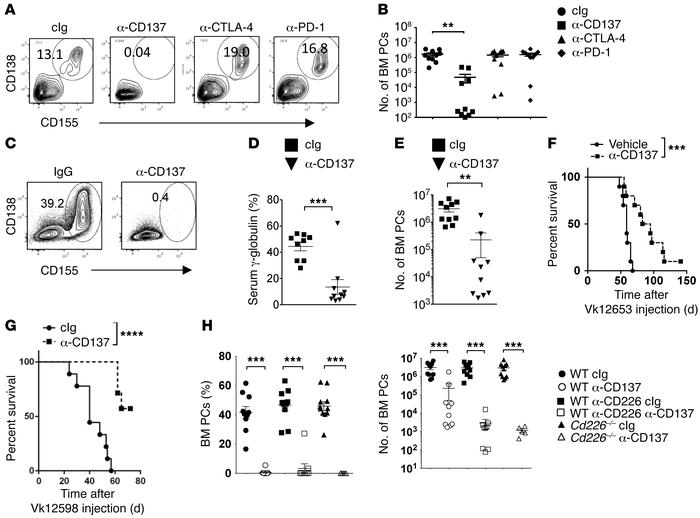