A lymphatic defect causes ocular hypertension and glaucoma in mice

A lymphatic defect causes ocular hypertension and glaucoma in mice

Glaucoma is a leading cause of blindness, afflicting more than 60 million people worldwide. Increased intraocular pressure (IOP) due to impaired aqueous humor drainage is a major risk factor for the development of glaucoma. Here, we demonstrated that genetic disruption of the angiopoietin/TIE2 (ANGPT/TIE2) signaling pathway results in high IOP, buphthalmos, and classic features of glaucoma, including retinal ganglion degeneration and vision loss. Eyes from mice with induced deletion of and (A1A2FloxWB mice) lacked drainage pathways in the corneal limbus, including Schlemm’s canal and lymphatic capillaries, which share expression of the PROX1, VEGFR3, and FOXC family of transcription factors. VEGFR3 and FOXCs have been linked to lymphatic disorders in patients, and FOXC1 has been linked to glaucoma. In contrast to blood endothelium, in which ANGPT2 is an antagonist of ANGPT1, we have shown that both ligands cooperate to regulate TIE2 in the lymphatic network of the eye. While A1A2FloxWB mice developed high IOP and glaucoma, expression of ANGPT1 or ANGPT2 alone was sufficient for ocular drainage. Furthermore, we demonstrated that loss of FOXC2 from lymphatics results in TIE2 downregulation, suggesting a mechanism for ocular defects in patients with FOXC mutations. These data reveal a pathogenetic and molecular basis for glaucoma and demonstrate the importance of angiopoietin ligand cooperation in the lymphatic endothelium. 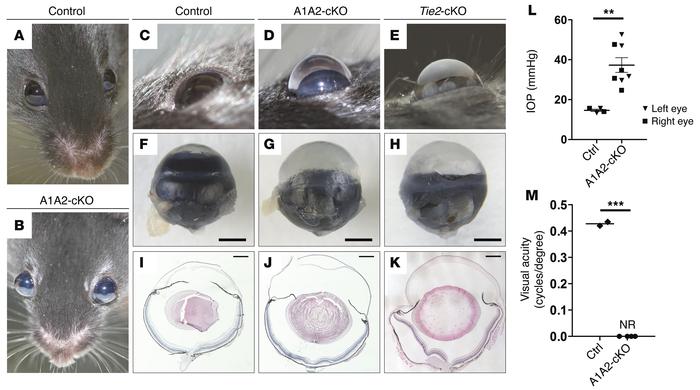