Detoxification of hydrogen sulfide and methanethiol in the cecal mucosa

Detoxification of hydrogen sulfide and methanethiol in the cecal mucosa

Colonic bacteria liberate large quantities of the highly toxic gases hydrogen sulfide (H2S) and methanethiol (CH3SH). The colonic mucosa presumably has an efficient means of detoxifying these compounds, which is thought to occur through methylation of H2S to CH3SH and CH3SH to dimethylsulfide (CH3SCH3). We investigated this detoxification pathway by incubating rat cecal mucosal homogenates with gas containing H2S, CH3SH, or CH3SCH3. Neither CH3SH nor CH3SCH3 was produced during H2S catabolism, whereas catabolism of CH3SH liberated H2S but not CH3SCH3. Thus, H2S and CH3SH are not detoxified by methylation to CH3SCH3. Rather, CH3SH is demethylated to H2S, and H2S is converted to nonvolatile metabolites. HPLC analysis of the homogenate showed the metabolite to be primarily thiosulfate. Analysis of cecal venous blood obtained after intracecal instillation of H235S revealed that virtually all absorbed H2S had been oxidized to thiosulfate. The oxidation rate of H2S by colonic mucosa was 10,000 times greater than the reported methylation rate. Conversion to thiosulfate appears to be the mechanism whereby the cecal mucosa protects itself from the injurious effects of H2S and CH3SH, and defects in this detoxification possibly could play a role in colonic diseases such as ulcerative colitis. 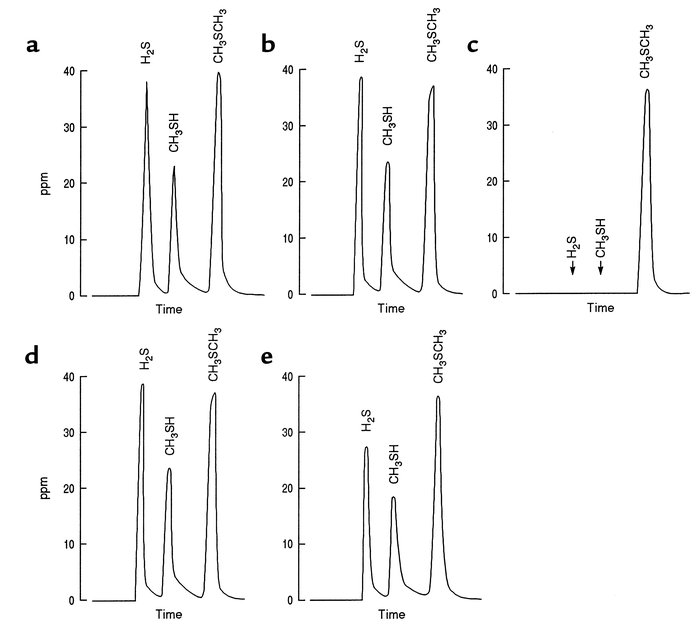