Variants near the gene are significantly associated with several plasma lipid traits, circulating liver enzymes, and the development of coronary artery disease in humans; however, it is not clear how its protein product tribbles-1 regulates lipid metabolism. Here, we evaluated mice harboring a liver-specific deletion of (Trib1_LSKO) to elucidate the role of tribbles-1 in mammalian hepatic lipid metabolism. These mice exhibited increased hepatic triglyceride (TG) content, lipogenic gene transcription, and de novo lipogenesis. Microarray analysis revealed altered transcription of genes that are downstream of the transcription factor C/EBPα, and Trib1_LSKO mice had increased hepatic C/EBPα protein. Hepatic overexpression of C/EBPα in WT mice phenocopied Trib1_LSKO livers, and hepatic knockout of in Trib1_LSKO mice revealed that C/EBPα is required for the increased lipogenesis. Using ChIP-Seq, we found that Trib1_LSKO mice had increased DNA-bound C/EBPα near lipogenic genes and the gene, which itself was transcriptionally upregulated by C/EBPα overexpression. Together, our results reveal that tribbles-1 regulates hepatic lipogenesis through posttranscriptional regulation of C/EBPα, which in turn transcriptionally upregulates . These data suggest an important role for C/EBPα in mediating the lipogenic effects of hepatic deletion and provide insight into the association between and plasma lipids, and liver traits in humans. 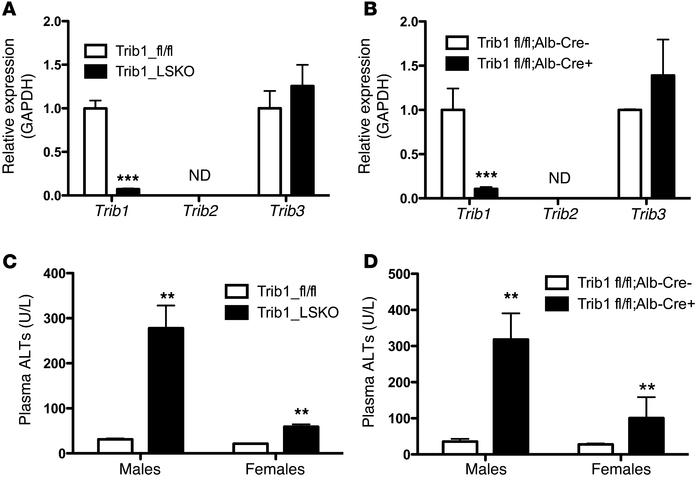