Maturation of PC1 is associated with the dosage of PC2. 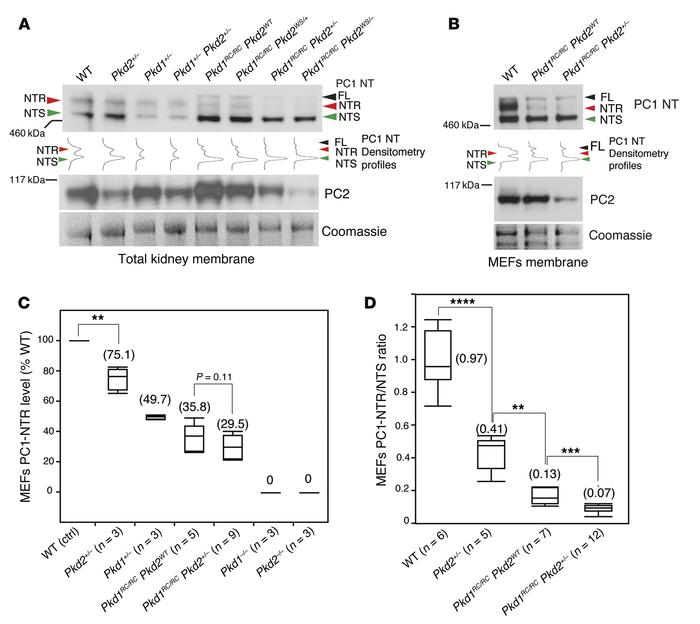 () Membrane protein purified from P9 mouse kidneys of WT, , , and bigenic combinations with the genotype and allele assayed by SDS-PAGE and probed with PC1 NT and PC2 antibodies. Densitometric profiles of the NT products are shown with a Coomassie-stained loading control. Reduction of reduced the level of PC1-NTR, while reduction lowered the level of both products. Note in animals that the PC1-FL product is more evident, consistent with the previously described partial cleavage defect (20). Representative blots are shown from 3 independent experiments. () IB of membrane-purified protein from WT, , and MEFs detected with PC1 NT or PC2 antibodies showing the PC1-FL, PC1-NTR, and PC1-NTS glycoforms, PC2, and control Coomassie band. Representative blots are shown from 3 independent experiments. () Quantification of PC1-NTR from MEFs with various and genotypes. Results were derived from a minimum of 3 independent IBs and biological replicates obtained from 2 separate crosses (numbers [] indicated) and compared with the WT average from each group, with significance determined by the Student’s test. () Relative ratio of PC1-NTR to NTS expression for indicated MEF genotypes (numbers [] indicated). The significance of the difference between means was compared using the Student’s test. For and , quartile box plots represent the median, quartiles, and minimum/maximum range, with means of each group in parentheses. ** < 0.01; *** < 0.001; **** < 0.0001.