Processing, complexing, and localization of PC1 and PC2. 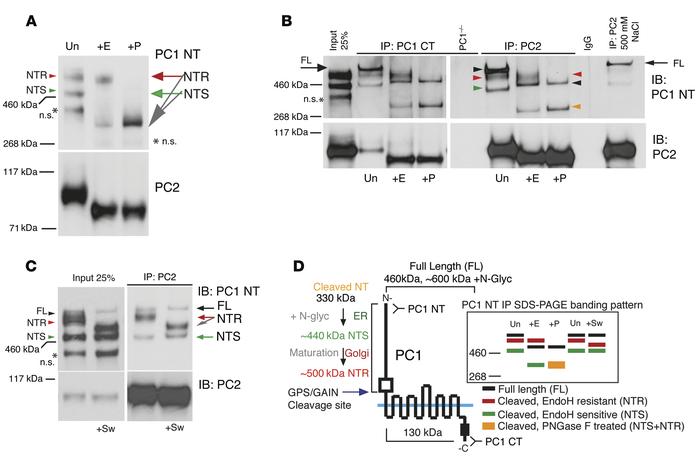 () Immunoblot (IB) of endogenous human PC1 and PC2 derived from membrane fractions of a renal cortical tubule epithelial (RCTE) cell line. Samples were untreated (Un) or treated with EndoH (+E) or PNGase F (+P) and detected with an antibody against N-terminal PC1 (7e12; PC1 NT) or PC2 (YCE2). A nonspecific protein () is indicated (n.s.). N-terminal glycoproducts, EndoH resistant (NTR) and EndoH sensitive (NTS), were resolved and were both reduced to the size of the aa backbone with PNGase F treatment (~330 kDa). All of PC2 was sensitive to EndoH. Representative blots are shown from 3 independent experiments. () IPs with a PC1 CT (BD3) or PC2 (YCE2) antibody from RCTE cells followed by deglycosylation detected with PC1 NT or YCE2 (PC2). epithelial cells (9-12 cells; ) and IP with irrelevant antibody (IgG) were used as negative controls. The PC1 and PC2 complex was formed in the ER (EndoH sensitive), since PC2 coimmunoprecipitated all PC1 glycoforms, including PC1-FL, even in high-salt (500 mM NaCl) conditions. Representative blots are shown from 3 independent experiments. () Maturation of PC1-NTR was affected by 2 μg/ml swainsonine (+Sw) treatment. A 72-hour swainsonine treatment reduced the PC1-NTR molecular weight but did not affect PC1-NTS, PC1-FL, or PC2, indicating that only PC1, but not PC2, traffics through the Golgi apparatus. Representative blots are shown from 3 independent experiments. () Schematic of PC1 cleavage and glycosylation showing the size of the FL and the 2 GPS/GAIN N-terminal cleavage products, NTS and NTR.