There is strong evidence that overproduction of soluble fms-like tyrosine kinase-1 (sFLT1) in the placenta is a major cause of vascular dysfunction in preeclampsia through sFLT1-dependent antagonism of VEGF. However, the cause of placental sFLT1 upregulation is not known. Here we demonstrated that in women with preeclampsia, sFLT1 is upregulated in placental trophoblasts, while VEGF is upregulated in adjacent maternal decidual cells. In response to VEGF, expression of mRNA, but not full-length mRNA, increased in cultured murine trophoblast stem cells. We developed a method for transgene expression specifically in mouse endometrium and found that endometrial-specific VEGF overexpression induced placental sFLT1 production and elevated sFLT1 levels in maternal serum. This led to pregnancy losses, placental vascular defects, and preeclampsia-like symptoms, including hypertension, proteinuria, and glomerular endotheliosis in the mother. Knockdown of placental with a trophoblast-specific transgene caused placental vascular changes that were consistent with excess VEGF activity. Moreover, knockdown in VEGF-overexpressing animals enhanced symptoms produced by VEGF overexpression alone. These findings indicate that sFLT1 plays an essential role in maintaining vascular integrity in the placenta by sequestering excess maternal VEGF and suggest that a local increase in VEGF can trigger placental overexpression of sFLT1, potentially contributing to the development of preeclampsia and other pregnancy complications. 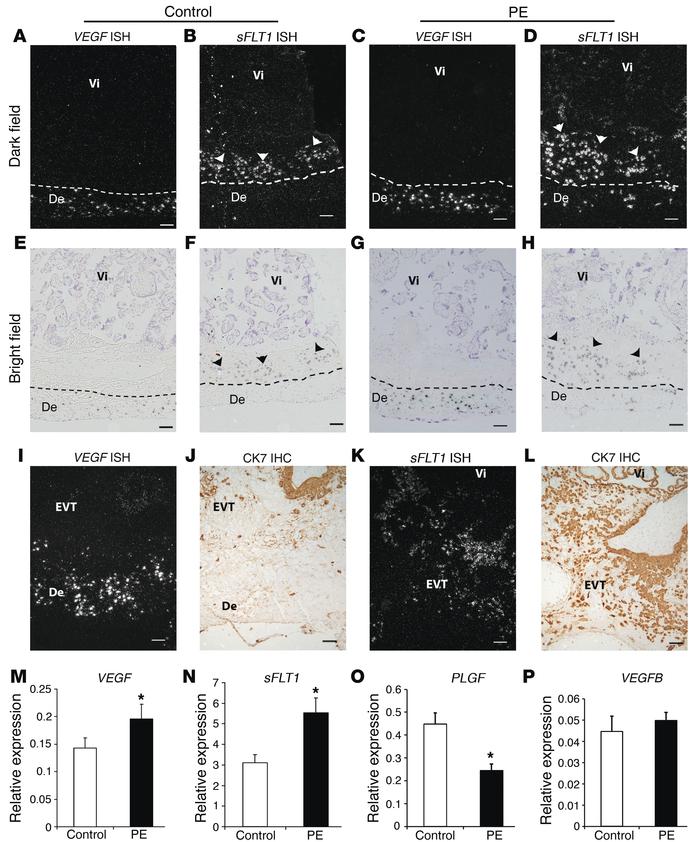 (–) and mRNA expression by ISH (basal plate). Dashed lines demarcate the border between decidua (De) and placenta. Vi, villi. In specimens from both control and preeclamptic (PE) women, was expressed specifically in maternal decidual cells (, , , and ), and in adjacent EVTs (arrowheads; , , , and ), but levels of both were dramatically elevated in preeclamptic specimens. (–) () and () ISH and CK7 IHC ( and ; sections adjacent to and ). (–) (), (), (), and () total mRNA levels in placental basal plate samples from control and preeclamptic women, determined by qPCR. In preeclampsia, while levels of both and significantly increased, significantly decreased, and remained unchanged. Results are mean ± SD. * < 0.05 ( = 15). Scale bars: 100 μm.