Cardiac-specific ablation of ARNT leads to lipotoxicity and cardiomyopathy

Cardiac-specific ablation of ARNT leads to lipotoxicity and cardiomyopathy

Patients with type 2 diabetes often present with cardiovascular complications; however, it is not clear how diabetes promotes cardiac dysfunction. In murine models, deletion of the gene encoding aryl hydrocarbon nuclear translocator (ARNT, also known as HIF1β) in the liver or pancreas leads to a diabetic phenotype; however, the role of ARNT in cardiac metabolism is unknown. Here, we determined that cardiac-specific deletion of in adult mice results in rapid development of cardiomyopathy (CM) that is characterized by accumulation of lipid droplets. Compared with hearts from ARNT-expressing mice, ex vivo analysis of ARNT-deficient hearts revealed a 2-fold increase in fatty acid (FA) oxidation as well as a substantial increase in the expression of PPARα and its target genes. Furthermore, deletion of both and preserved cardiac function, improved survival, and completely reversed the FA accumulation phenotype, indicating that PPARα mediates the detrimental effects of deletion in the heart. Finally, we determined that ARNT directly regulates expression by binding to its promoter and forming a complex with HIF2α. Together, these findings suggest that ARNT is a critical regulator of myocardial FA metabolism and that its deletion leads to CM and an increase in triglyceride accumulation through PPARα. 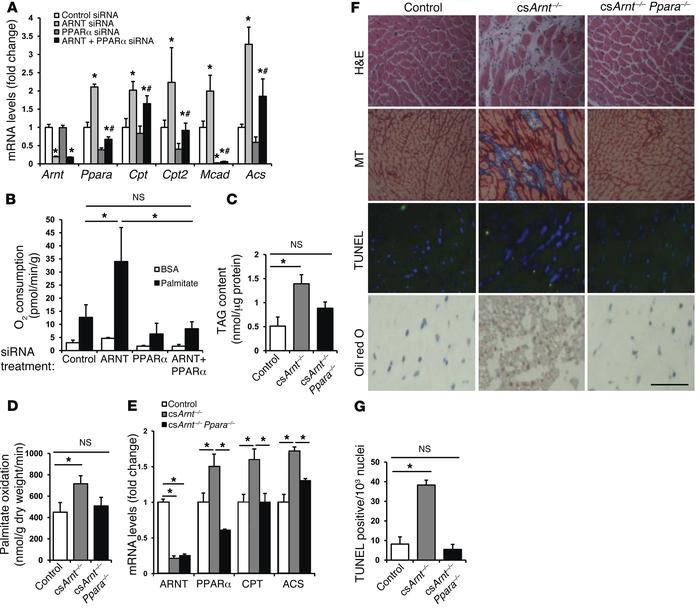