Many patients who undergo general anesthesia and surgery experience cognitive dysfunction, particularly memory deficits that can persist for days to months. The mechanisms underlying this postoperative cognitive dysfunction in the adult brain remain poorly understood. Depression of brain function during anesthesia is attributed primarily to increased activity of γ-aminobutyric acid type A receptors (GABAARs), and it is assumed that once the anesthetic drug is eliminated, the activity of GABAARs rapidly returns to baseline and these receptors no longer impair memory. Here, using a murine model, we found that a single in vivo treatment with the injectable anesthetic etomidate increased a tonic inhibitory current generated by α5 subunit–containing GABAARs (α5GABAARs) and cell-surface expression of α5GABAARs for at least 1 week. The sustained increase in α5GABAAR activity impaired memory performance and synaptic plasticity in the hippocampus. Inhibition of α5GABAARs completely reversed the memory deficits after anesthesia. Similarly, the inhaled anesthetic isoflurane triggered a persistent increase in tonic current and cell-surface expression of α5GABAARs. Thus, α5GABAAR function does not return to baseline after the anesthetic is eliminated, suggesting a mechanism to account for persistent memory deficits after general anesthesia. 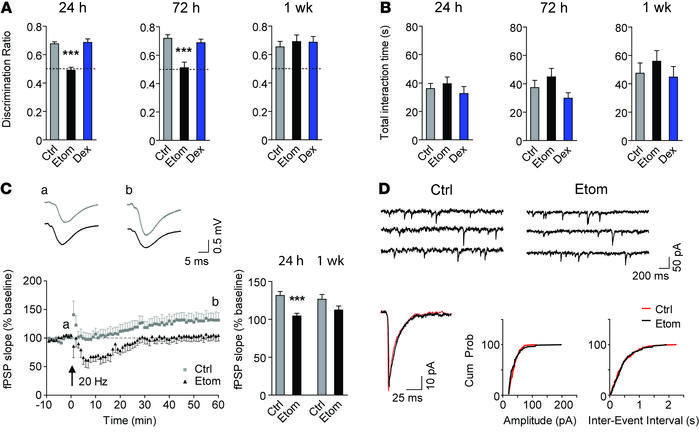