It has been proposed that elevated levels of tissue iron increase the risk for atherosclerosis, perhaps by favoring the formation of pro-atherogenic oxidized LDL. Working with apoE-deficient (apoE–/–) mice, which do not require a high-fat diet to develop atherosclerosis, we compared the effects of standard diet (0.02% iron) or a 2% carbonyl iron diet. After 24 weeks, mice fed the 2% carbonyl iron diet had twice as much iron in their plasma, a ninefold increase in bleomycin-detectable free iron in their plasma, and ten times as much iron in their livers as control mice. Dietary iron overload caused a modest (30%) rise in plasma triglyceride and cholesterol. Nevertheless, this regimen did not exacerbate, but rather reduced the severity of atherosclerosis by 50%, and it failed to elevate hepatic levels of heme oxygenase mRNA, which is induced by many different oxidative insults in vitro. Moreover, hepatic levels of protein-bound dityrosine and ortho-tyrosine, two markers of metal-catalyzed oxidative damage in vitro, failed to rise in iron-overloaded animals. Our observations suggest that elevated serum and tissue levels of iron are not atherogenic in apoE–/– mice. Moreover, they call into question the hypothesis that elevated levels of tissue iron promote LDL oxidation and oxidative stress in vivo. 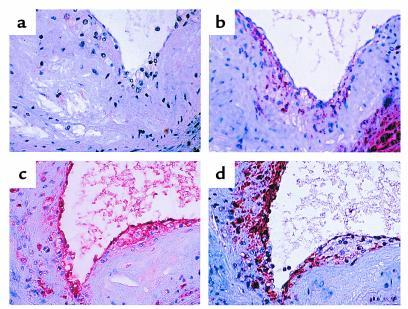 Immunostaining for ferritin and α-actin at the artery wall. ApoE–/– mice were fed the high-iron (2.0%) diet for 24 weeks, and 10-μm thick cryostat sections were taken at the aortic sinus. Serial sections for mice fed the low-iron diet ( and ) and high-iron diet ( and ) are shown and stained for ferritin ( and ) and α-actin ( and ). The α-actin epitopes were used to delineate the presence and location of smooth muscle cells. Macrophage foam cells can be seen for high iron–fed mice as a bulbous cap on the right portion of each section. For low iron–fed mice, macrophage foam cells are seen below the endothelium and interspersed within the lesion. ×400.