Lacteals are lymphatic vessels located at the center of each intestinal villus and provide essential transport routes for lipids and other lipophilic molecules. However, it is unclear how absorbed molecules are transported through the lacteal. Here, we used reporter mice that express GFP under the control of the lymphatic-specific promoter and a custom-built confocal microscope and performed intravital real-time visualization of the absorption and transport dynamics of fluorescence-tagged fatty acids (FAs) and various exogenous molecules in the intestinal villi in vivo. These analyses clearly revealed transepithelial absorption of these molecules via enterocytes, diffusive distribution over the lamina propria, and subsequent transport through lacteals. Moreover, we observed active contraction of lacteals, which seemed to be directly involved in dietary lipid drainage. Our analysis revealed that the smooth muscles that surround each lacteal are responsible for contractile dynamics and that lacteal contraction is ultimately controlled by the autonomic nervous system. These results indicate that the lacteal is a unique organ-specific lymphatic system and does not merely serve as a passive conduit but as an active pump that transports lipids. Collectively, using this efficient imaging method, we uncovered drainage of absorbed molecules in small intestinal villus lacteals and the involvement of lacteal contractibility. 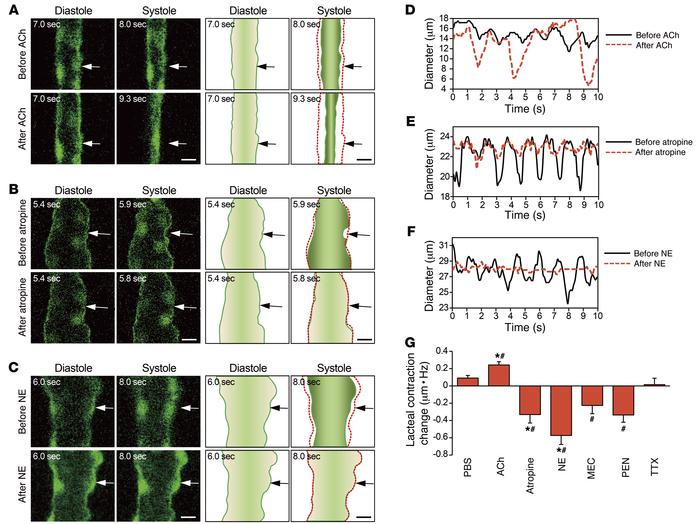 Representative images of lacteal contraction and their illustrations before and after the administration of () acetylcholine (ACh), () atropine, and () norepinephrine (NE) in different lacteals. Arrows indicate the points at which the diameters were measured. The red dotted lines outline the structure of each lacteal at the initial time point. Scale bar: 10 μm. Lacteal diameter versus time, comparing the contractility of lacteals before and after the administration of () acetylcholine, () atropine, and () norepinephrine. () Quantification of the changes in lacteal contraction after administration of PBS, acetylcholine, atropine, norepinephrine, mecamylamine (MEC), pentolinium (PEN), and TTX, which were calculated by the average amplitude multiplied by the frequency of lacteal diameter change. The numbers of villi that were quantified are 37, 37, and 39 from 4 mice each for the PBS, acetylcholine, and MEC groups, respectively; 47 and 42 from 5 mice each for the atropine and norepinephrine groups, respectively; and 26 and 25 from 3 mice each for the PEN and TTX groups, respectively. * < 0.05, paired Student’s test, differences between before and after drug administration. # < 0.05, nonpaired Student’s test, differences from the PBS group. Error bars indicate SEM.