The blood-brain barrier (BBB) protects the brain from toxic substances within the peripheral circulation. It maintains brain homeostasis and is a hurdle for drug delivery to the CNS to treat neurodegenerative diseases, including Alzheimer’s disease and brain tumors. The drug efflux transporter P-glycoprotein (P-gp) is highly expressed on brain endothelial cells and blocks the entry of most drugs delivered to the brain. Here, we show that activation of the A2A adenosine receptor (AR) with an FDA-approved A2A AR agonist (Lexiscan) rapidly and potently decreased P-gp expression and function in a time-dependent and reversible manner. We demonstrate that downmodulation of P-gp expression and function coincided with chemotherapeutic drug accumulation in brains of WT mice and in primary mouse and human brain endothelial cells, which serve as in vitro BBB models. Lexiscan also potently downregulated the expression of BCRP1, an efflux transporter that is highly expressed in the CNS vasculature and other tissues. Finally, we determined that multiple pathways, including MMP9 cleavage and ubiquitinylation, mediated P-gp downmodulation. Based on these data, we propose that A2A AR activation on BBB endothelial cells offers a therapeutic window that can be fine-tuned for drug delivery to the brain and has potential as a CNS drug-delivery technology.

P-gp is expressed mostly in the cytoplasm of human brain endothelial cells and is colocalized with caveolae. 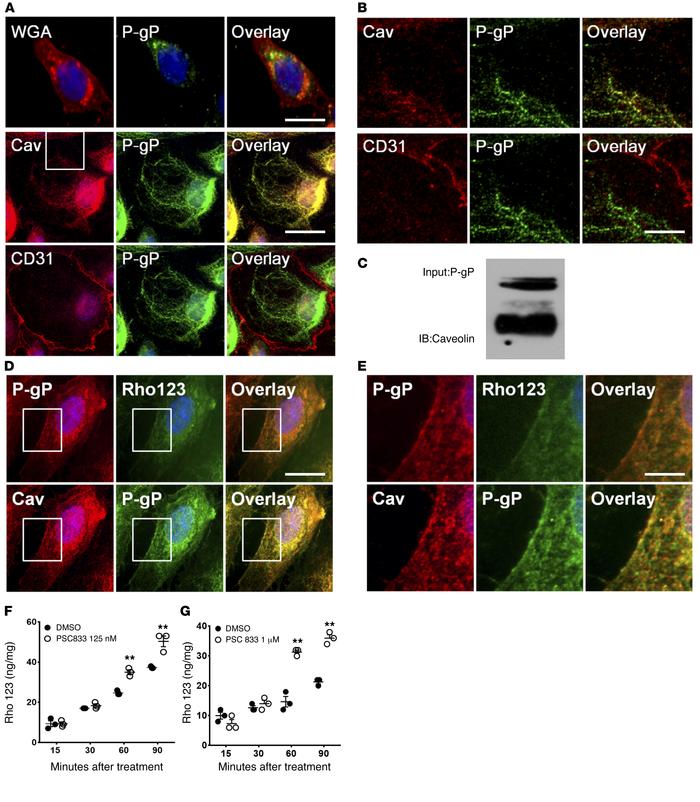