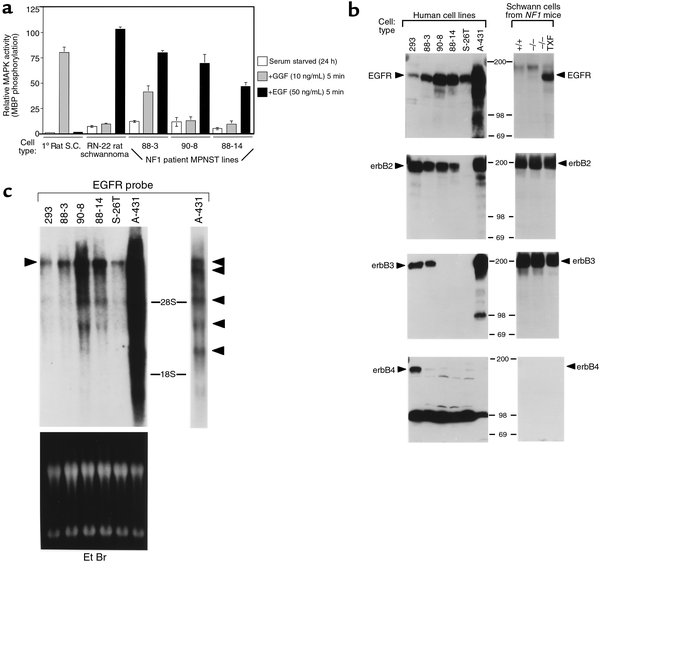 Response of primary rat Schwann cells, RN-22 rat schwannoma line, and human NF1 patient MPNST lines to GGF and EGF, and expression of EGF-R and erbB2, -3, and -4 proteins and mRNA. () The indicated cells were grown until nearly confluent, serum starved for 24 hours, then left untreated (–) or stimulated with 10 ng/mL recombinant human GGF (G) or 50 ng/mL recombinant human EGF (E) for 5 minutes at 37°C. The cells were lysed and the endogenous MAP kinase activity was assayed. Following the reaction, incorporation of 32Pi into exogenous myelin basic protein was determined. Values were normalized to unstimulated primary rat Schwann cells (1.0) and represent the results of two experiments, carried out in duplicate, with error bars shown. () Expression of EGF-R and erbB2, -3, and -4 proteins in human and mouse cells. Cells were grown until confluent and lysed, and lysates containing 50 μg human or 100 μg mouse cell protein were subjected to analysis by SDS-PAGE and immunoblotting using antibodies specific for each protein indicated (arrows). 293, human embryonic kidney cells; 88-3, 90-8, 88-14, human NF1 MPNST lines; S-26T, human non-NF1 MPNST line; A-431, human epidermoid carcinoma line. Migration of molecular standards (kDa) is indicated at center. A strong nonspecific band of approximately 90 kDa appeared in the erbB4 blot of human but not mouse lysates. () Expression of mRNA in human MPNST and control cell lines. Cells were grown until confluent and lysed, and 20 μg of total RNA from each line was subjected to electrophoresis, transferred to a filter, and hybridized to a human probe labeled with 32P. The predominant 10.5-kb mRNA is indicated with an arrow at left, as is the approximate location of the 28S and 18S RNAs (top). At right is a shorter exposure of the A-431 line, with arrows designating the different mRNAs detected. The filter was photographed under ultraviolet light before hybridization (bottom).