Liraglutide is a glucagon-like peptide-1 (GLP-1) analog marketed for the treatment of type 2 diabetes. Besides lowering blood glucose, liraglutide also reduces body weight. It is not fully understood how liraglutide induces weight loss or to what degree liraglutide acts directly in the brain. Here, we determined that liraglutide does not activate GLP-1–producing neurons in the hindbrain, and liraglutide-dependent body weight reduction in rats was independent of GLP-1 receptors (GLP-1Rs) in the vagus nerve, area postrema, and paraventricular nucleus. Peripheral injection of fluorescently labeled liraglutide in mice revealed the presence of the drug in the circumventricular organs. Moreover, labeled liraglutide bound neurons within the arcuate nucleus (ARC) and other discrete sites in the hypothalamus. GLP-1R was necessary for liraglutide uptake in the brain, as liraglutide binding was not seen in mice. In the ARC, liraglutide was internalized in neurons expressing proopiomelanocortin (POMC) and cocaine- and amphetamine-regulated transcript (CART). Electrophysiological measurements of murine brain slices revealed that GLP-1 directly stimulates POMC/CART neurons and indirectly inhibits neurotransmission in neurons expressing neuropeptide Y (NPY) and agouti-related peptide (AgRP) via GABA-dependent signaling. Collectively, our findings indicate that the GLP-1R on POMC/CART-expressing ARC neurons likely mediates liraglutide-induced weight loss. 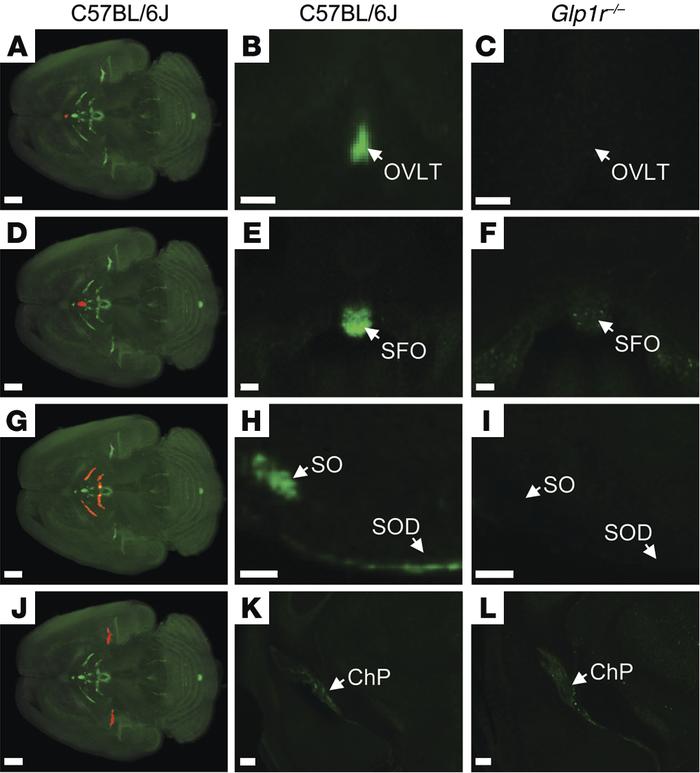 The brain tissue was scanned at 620 nm and 710 nm, representing both autofluorescence from the tissue (gray) and specific signal (green). The red regions in , , , and are shown at higher magnification in , , and , respectively (unspecific staining has been removed as described in Supplemental Figure 2). Images in the middle and right columns represent enlargements of a single section from (, , , and ) C57BL/6J or (, , , and ) mice administered with liraglutide750. Liraglutide750 was detectable in ( and ) organum vasculosum of the lamina terminalis, ( and ) subfornical organ, ( and ) supraoptic nucleus and supraoptic decussation, and ( and ) ChP. (, , , and ) In mice lacking a functional GLP-1R, no liraglutide750 signal could be detected in any of these regions except from ChP. Scale bars: 200 μm (, , , and –); 100 μm (, , , , , and ). OVLT, organum vasculosum of lamina terminalis; SFO, subfornical organ; SO, supraoptic nucleus; SOD, supraoptic decussation.