IL-12 and IL-18 are IFN-γ–inducing cytokines. In the present study, the role of endogenous IL-18 in the induction of IFN-γ by IL-12 was investigated in mice. In the presence of a specific inhibitor of caspase-1 (also known as IL-1β–converting enzyme, or ICE) IL-12–induced IFN-γ from splenocytes was reduced by 85%. Using splenocytes from ICE-deficient mice, IL-12–induced IFN-γ was reduced by 80%. However, the role of ICE was not through processing and release of IL-1β. Neutralizing anti–IL-18 IgG reduced IL-12–induced IFN-γ in splenocytes by 85%. Splenocytes cultured in vitro spontaneously released IL-18 into the extracellular compartment over time. Extracellular levels of IL-18 significantly correlated with IL-12–induced IFN-γ and were reduced in cells obtained from ICE-deficient mice. In vivo, IL-12 administration increased circulating levels of IL-18 in wild-type mice but not in ICE-deficient mice. Both neutralization of IL-18 and ICE deficiency significantly reduced induction of circulating IFN-γ in mice receiving IL-12. The IL-18 precursor was constitutively expressed in the livers and spleens of untreated mice. Furthermore, administration of IL-12 significantly increased liver-associated IL-18 levels. These data demonstrate that endogenous, ICE-cleaved IL-18 significantly contributes to induction of IFN-γ by IL-12. 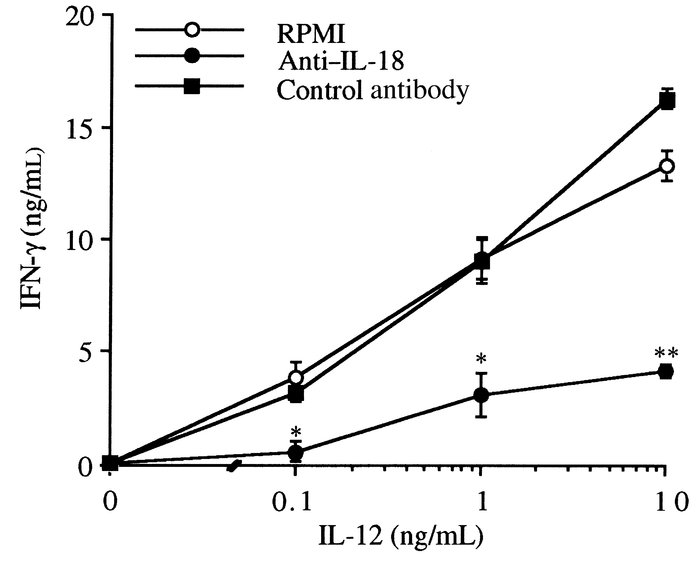 Effect of IL-18 neutralization on the induction of IFN-γ by IL-12 in vitro. Splenocytes were cultured for 48 hours with increasing concentrations of IL-12 (0.1–10 ng/mL) in the presence or absence of either neutralizing anti–IL-18 IgG or control IgG (50 μg/mL). IFN-γ levels were measured in the supernatants. Data are mean ± SEM of 3 mice per group and are representative of 1 experiment out of 3 performed. * < 0.05, ** < 0.01 vs. RPMI or control IgG by repeated-measures ANOVA.