T cell activation is regulated by the interactions of surface receptors with stimulatory and inhibitory ligands. Programmed death-1 homolog (PD-1H, also called VISTA) is a member of the CD28 family of proteins and has been shown to act as a coinhibitory ligand on APCs that suppress T cell responses. Here, we determined that PD-1H functions as a coinhibitory receptor for CD4+ T cells. CD4+ T cells in mice lacking PD-1H exhibited a dramatically increased response to antigen stimulation. Furthermore, delivery of a PD-1H–specific agonist mAb directly inhibited CD4+ T cell activation both in vitro and in vivo, validating a coinhibitory function of PD-1H. In a murine model of acute hepatitis, administration of a PD-1H agonist mAb suppressed CD4+ T cell–mediated acute inflammation. PD-1H–deficient animals were highly resistant to tumor induction in a murine brain glioma model, and depletion of CD4+ T cells, but not CD8+ T cells, promoted tumor formation. Together, our findings suggest that PD-1H has potential as a target of immune modulation in the treatment of human inflammation and malignancies. 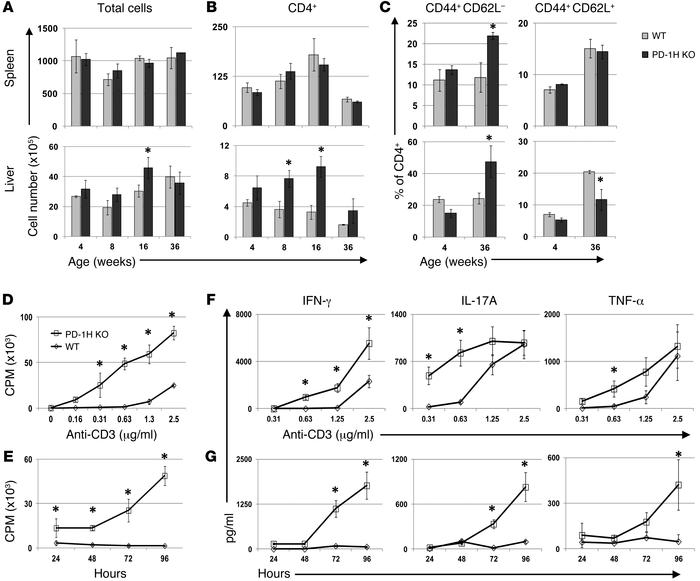 () Total cell numbers calculated in the spleen and liver of 4-, 8-, 16-, and 36-week-old PD-1H–KO mice and WT littermates. () Absolute CD4+ cell numbers were determined by total cell count multiplied by percentage of total cells/100 as determined by flow cytometry. () CD44+CD62L– and CD44+CD62L+ populations were determined as a percentage of CD4+ T cells at 4 and 36 weeks in both the spleen and liver. 5 to 6 mice were analyzed per group at each time point. PD-1H–deficient CD4+ T cell proliferation and cytokine production are enhanced in vitro. 96-well plates were coated overnight with anti-CD3 mAb, and purified CD4+ T cells were added to the wells. Plates were pulsed overnight with 3-HTdR thymidine. () Proliferation of PD-1H–KO or WT CD4+ T cells at serial dilutions of anti-CD3 was determined at 96 hours. Other time points were similar. () Proliferation at an anti-CD3 mAb of 0.63 μg/ml is shown at 24, 48, 72, and 96 hours. ( and ) Supernatants were harvested from 96-well proliferation plates at 24, 48, 72, and 96 hours and analyzed for IFN-γ, IL-17A, and TNF-α. In , cytokine concentrations at 96 hours are shown at serial dilutions of anti-CD3 mAb. In , cytokine concentrations are shown at 24, 48, 72 and 96 hours at a single anti-CD3 concentration. All experiments were repeated at least 3 times in triplicate. * < 0.05.