Maturation of T cell–activating APCs directly links innate and adaptive immunity and is typically triggered by microbial infection. Transplantation of allografts, which are sterile, generates strong T cell responses; however, it is unclear how grafts induce APC maturation in the absence of microbial-derived signals. A widely accepted hypothesis is that dying cells in the graft release “danger” molecules that induce APC maturation and initiate the adaptive alloimmune response. Here, we demonstrated that danger signals associated with dying cells are not sufficient to initiate alloimmunity, but that recognition of allogeneic non-self by the innate immune system is required. In WT as well as in T cell–, B cell–, and innate lymphoid cell–deficient mice, allogeneic grafts elicited persistent differentiation of monocytes into mature DCs that expressed IL-12 and stimulated T cell proliferation and IFN-γ production. In contrast, syngeneic grafts in the same mice elicited transient and less pronounced differentiation of monocytes into DCs, which neither expressed IL-12 nor stimulated IFN-γ production. In a model in which T cell recognition is restricted to a single foreign antigen on the graft, rejection occurred only if the allogeneic non-self signal was also sensed by the host’s innate immune system. These findings underscore the importance of innate recognition of allogeneic non-self by monocytes in initiating graft rejection. 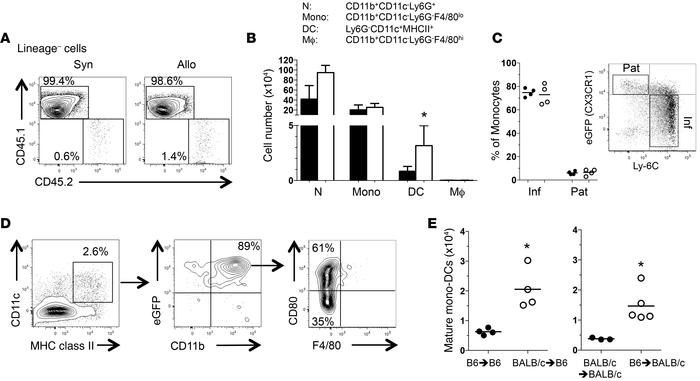