Acute stimulation of cardiac β-adrenoceptors is crucial to increasing cardiac function under stress; however, sustained β-adrenergic stimulation has been implicated in pathological myocardial remodeling and heart failure. Here, we have demonstrated that export of cAMP from cardiac myocytes is an intrinsic cardioprotective mechanism in response to cardiac stress. We report that infusion of cAMP into mice averted myocardial hypertrophy and fibrosis in a disease model of cardiac pressure overload. The protective effect of exogenous cAMP required adenosine receptor signaling. This observation led to the identification of a potent paracrine mechanism that is dependent on secreted cAMP. Specifically, FRET-based imaging of cAMP formation in primary cells and in myocardial tissue from murine hearts revealed that cardiomyocytes depend on the transporter ABCC4 to export cAMP as an extracellular signal. Extracellular cAMP, through its metabolite adenosine, reduced cardiomyocyte cAMP formation and hypertrophy by activating A1 adenosine receptors while delivering an antifibrotic signal to cardiac fibroblasts by A2 adenosine receptor activation. Together, our data reveal a paracrine role for secreted cAMP in intercellular signaling in the myocardium, and we postulate that secreted cAMP may also constitute an important signal in other tissues. 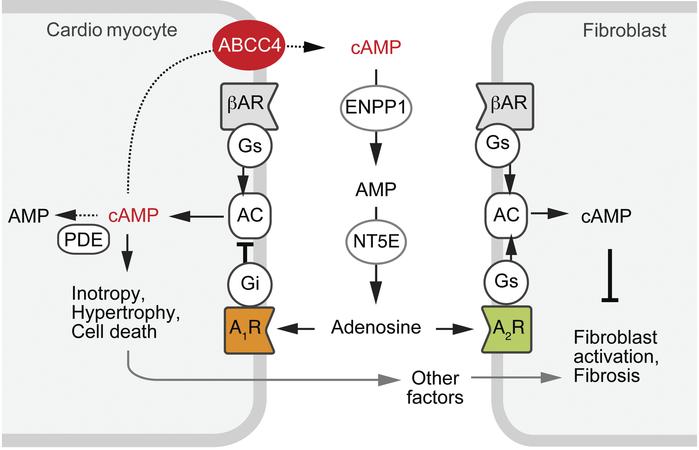