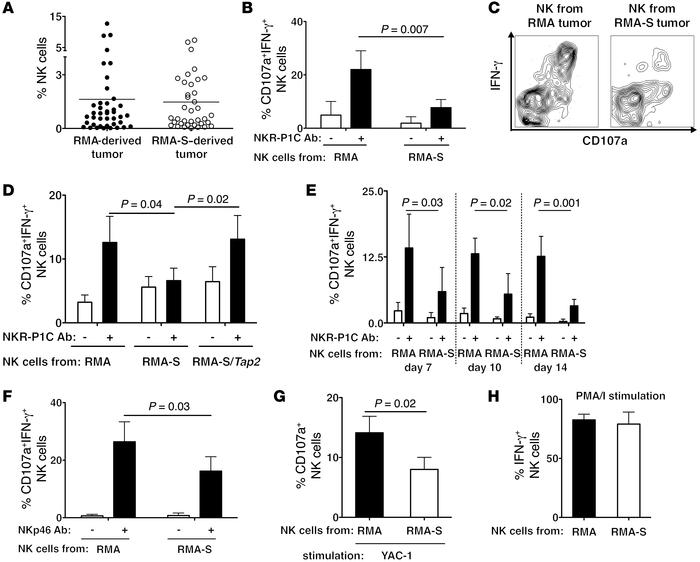 (–) Fourteen days after implantation, the percentages of NK cells among the viable cells in the tumors () and their responsiveness ( and ) were assessed by flow cytometry. Infiltrating leukocytes were restimulated in vitro with NKR-P1C antibody or control IgG (indicated as “+” and “–” in the legends), and IFN-γ accumulation and/or CD107a expression were determined. () Functional responsiveness of NK cells infiltrating tumors derived from RMA, RMA-S, or RMA-S/ cells was assayed as described in . () RMA or RMA-S cells were injected in a Matrigel solution 7, 10, or 14 days before the functional assays were performed. () Tumor-infiltrating leukocytes were restimulated in vitro with NKp46 antibody or control IgG, and IFN-γ accumulation and CD107a expression were evaluated. () RMA or RMA-S cells were implanted in Ubi-GFP/BL6 hosts, and after 14 days tumor-infiltrating leukocytes were sorted and cocultured for 5 hours with YAC-1 cells at an effector/target ratio of 10:1. NK cell degranulation was determined by assaying of CD107a expression at the cell surface. () Leukocytes from RMA or RMA-S tumors were stimulated with PMA and ionomycin before IFN-γ accumulation on NK cells was measured by flow cytometry. In all graphs, bars represent means ± SD. In all panels NK cells were gated as viable-CD3–CD19–Ter119–NKp46+ cells. The experiments included at least 4 mice per group and were performed 10 (), 3 ( and ), or 2 (, , and ) times with similar results. Statistical analyses were performed with the 2-tailed unpaired Student’s test.