Transgenic (TG) mice with cardiac Gsα overexpression exhibit enhanced inotropic and chronotropic responses to sympathetic stimulation, but develop cardiomyopathy with age. We tested the hypothesis that cardiomyopathy in TG mice with Gsα overexpression could be averted with chronic β-adrenergic receptor (β-AR) blockade. TG mice and age-matched wild-type littermates were treated with the β-AR blocker propranolol for 6–7 months, starting at a time when the cardiomyopathy was developing but was not yet severe enough to induce significant cardiac depression (9.5 months of age), and ending at a time when cardiac depression and cardiomyopathy would have been clearly manifest (16 months of age). Propranolol treatment, which can induce cardiac depression in the normal heart, actually prevented cardiac dilation and the depressed left ventricular function characteristic of older TG mice, and abolished premature mortality. Propranolol also prevented the increase in myocyte cross-sectional area and myocardial fibrosis. Myocyte apoptosis, already apparent in 9-month-old TG mice, was actually eliminated by chronic propranolol. This study indicates that chronic sympathetic stimulation over an extended period is deleterious and results in cardiomyopathy. Conversely, β-AR blockade is salutary in this situation and can prevent the development of cardiomyopathy. 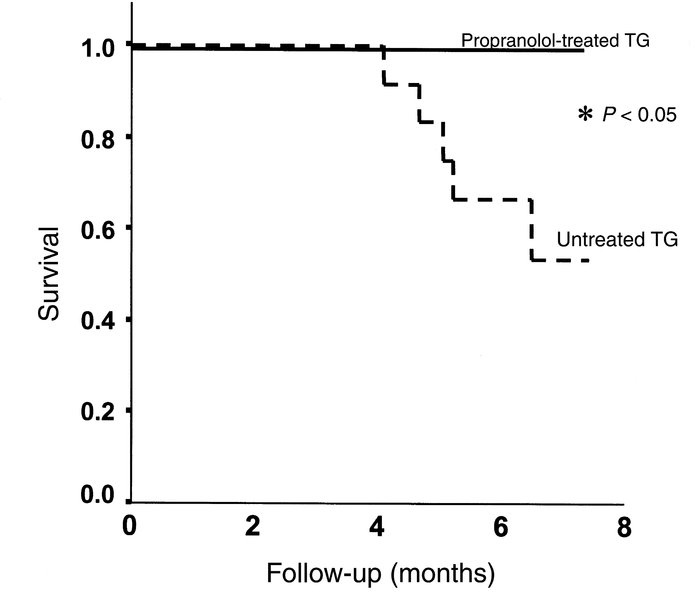