Cystic fibrosis (CF) intestinal disease is associated with the pathological manifestation mucoviscidosis, which is the secretion of tenacious, viscid mucus that plugs ducts and glands of epithelial-lined organs. Goblet cells are the principal cell type involved in exocytosis of mucin granules; however, little is known about the exocytotic process of goblet cells in the CF intestine. Using intestinal organoids from a CF mouse model, we determined that CF goblet cells have altered exocytotic dynamics, which involved intrathecal granule swelling that was abruptly followed by incomplete release of partially decondensated mucus. Some CF goblet cells exhibited an ectopic granule location and distorted cellular morphology, a phenotype that is consistent with retrograde intracellular granule movement during exocytosis. Increasing the luminal concentration of bicarbonate, which mimics CF transmembrane conductance regulator–mediated anion secretion, increased spontaneous degranulation in WT goblet cells and improved exocytotic dynamics in CF goblet cells; however, there was still an apparent incoordination between granule decondensation and exocytosis in the CF goblet cells. Compared with those within WT goblet cells, mucin granules within CF goblet cells had an alkaline pH, which may adversely affect the polyionic composition of the mucins. Together, these findings indicate that goblet cell dysfunction is an epithelial-autonomous defect in the CF intestine that likely contributes to the pathology of mucoviscidosis and the intestinal manifestations of obstruction and inflammation. 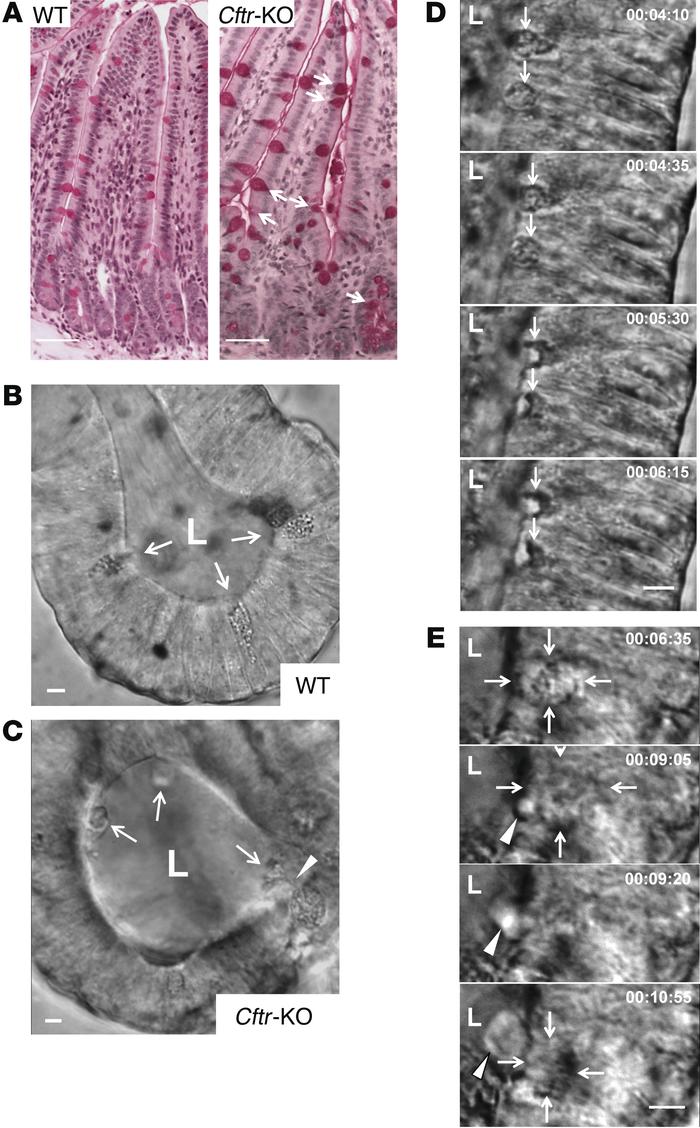