Multifactorial ERβ and NOTCH1 control of squamous differentiation and cancer

Multifactorial ERβ and NOTCH1 control of squamous differentiation and cancer

Downmodulation or loss-of-function mutations of the gene encoding NOTCH1 are associated with dysfunctional squamous cell differentiation and development of squamous cell carcinoma (SCC) in skin and internal organs. While NOTCH1 receptor activation has been well characterized, little is known about how gene transcription is regulated. Using bioinformatics and functional screening approaches, we identified several regulators of the gene in keratinocytes, with the transcription factors DLX5 and EGR3 and estrogen receptor β (ERβ) directly controlling its expression in differentiation. DLX5 and ERG3 are required for RNA polymerase II (PolII) recruitment to the locus, while ERβ controls transcription through RNA PolII pause release. Expression of several identified regulators, including ERβ, is frequently compromised in skin, head and neck, and lung SCCs and SCC-derived cell lines. Furthermore, a keratinocyte ERβ–dependent program of gene expression is subverted in SCCs from various body sites, and there are consistent differences in mutation and gene-expression signatures of head and neck and lung SCCs in female versus male patients. Experimentally increased ERβ expression or treatment with ERβ agonists inhibited proliferation of SCC cells and promoted NOTCH1 expression and squamous differentiation both in vitro and in mouse xenotransplants. Our data identify a link between transcriptional control of expression and the estrogen response in keratinocytes, with implications for differentiation therapy of squamous cancer.

Identification of transcription factors that control NOTCH1 expression in HKCs. 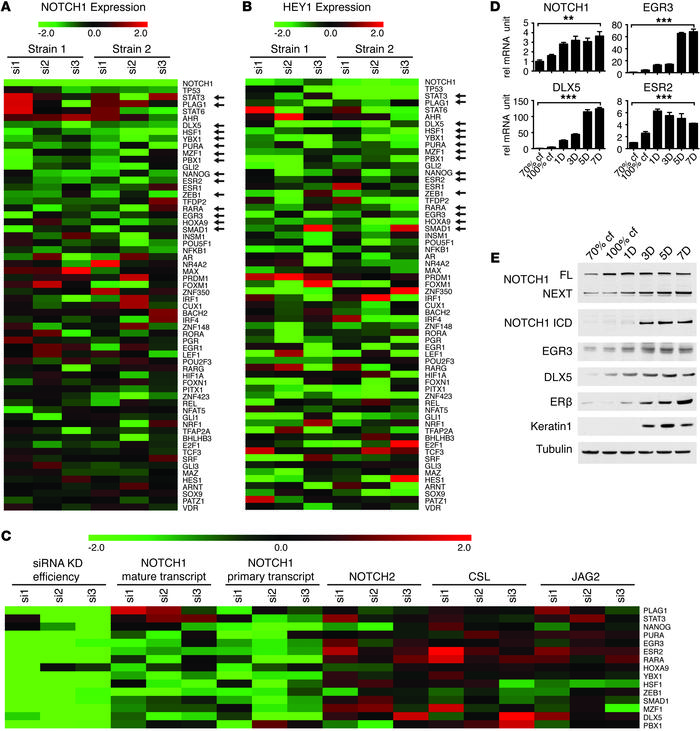 ( and ) Two different HKC strains were reverse transfected with siRNAs against the indicated set of transcription factor genes, with siRNAs against NOTCH1 and p53 (top 2 lines) as control for effectiveness of the assay. Three different siRNAs per gene were tested (si1–si3), each in triplicate wells. One week after transfection, HKCs were analyzed by RT-qPCR for levels of NOTCH1 and HEY1 expression, with 36β4 for normalization. Results are expressed as heat map of log2 ratios relative to cells transfected with scrambled siRNA control. Arrows indicate genes selected for further validation. () Validation of the above results for the indicated set of genes by reverse transfection of a third independent strain of HKCs, utilizing the same conditions as before. RT-qPCR analysis was used to assess siRNA KD efficiency of each gene and impact on levels of NOTCH1 primary and mature transcripts and other NOTCH pathway components. ( and ) RT-qPCR () and immunoblot analysis () of expression of the indicated genes in HKCs under proliferative conditions (70% confluence [cf]) and at various time (days [D]) of differentiation induced by high cell density. FL, full length; NEXT, NOTCH extracellular truncation, ICD, intracellular domain. mRNA levels were normalized for 36β4 and presented as fold-changes relative to cells under proliferative conditions. ** < 0.007; *** < 0.001. Similar results were obtained with analysis of an independent strain of HKCs (Supplemental Figure 2A). For detailed blot information, see complete unedited blots in the supplemental material.