The intestinal epithelium has a high rate of turnover, and dysregulation of pathways that regulate regeneration can lead to tumor development; however, the negative regulators of oncogenic events in the intestinal epithelium are not fully understood. Here we identified a feedback loop between the epidermal growth factor receptor (EGFR), a known mediator of proliferation, and the transient receptor potential cation channel, subfamily V, member 1 (TRPV1), in intestinal epithelial cells (IECs). We found that TRPV1 was expressed by IECs and was intrinsically activated upon EGFR stimulation. Subsequently, TRPV1 activation inhibited EGFR-induced epithelial cell proliferation via activation of Ca2+/calpain and resulting activation of protein tyrosine phosphatase 1B (PTP1B). In a murine model of multiple intestinal neoplasia ( mice), TRPV1 deficiency increased adenoma formation, and treatment of these animals with an EGFR kinase inhibitor reversed protumorigenic phenotypes, supporting a functional association between TRPV1 and EGFR signaling in IECs. Administration of a TRPV1 agonist suppressed intestinal tumorigenesis in mice, similar to — as well as in conjunction with — a cyclooxygenase-2 (COX-2) inhibitor, which suggests that targeting both TRPV1 and COX-2 has potential as a therapeutic approach for tumor prevention. Our findings implicate TRPV1 as a regulator of growth factor signaling in the intestinal epithelium through activation of PTP1B and subsequent suppression of intestinal tumorigenesis. 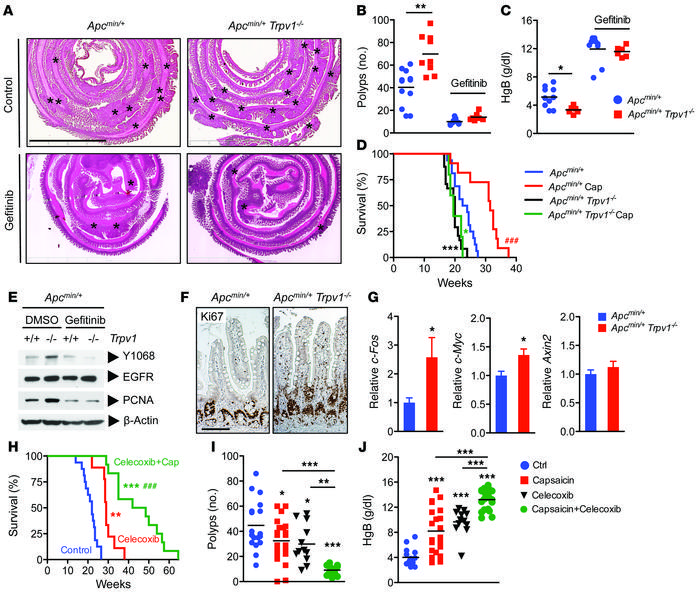