Clostridium difficile and the microbiota

Clostridium difficile and the microbiota

infection (CDI) is the leading health care–associated illness. Both human and animal models have demonstrated the importance of the gut microbiota’s capability of providing colonization resistance against . Risk factors for disease development include antibiotic use, which disrupts the gut microbiota, leading to the loss of colonization resistance and subsequent CDI. Identification of the specific microbes capable of restoring this function remains elusive. Future studies directed at how microbial communities influence the metabolic environment may help elucidate the role of the microbiota in disease development. These findings will improve current biotherapeutics for patients with CDI, particularly those with recurrent disease. 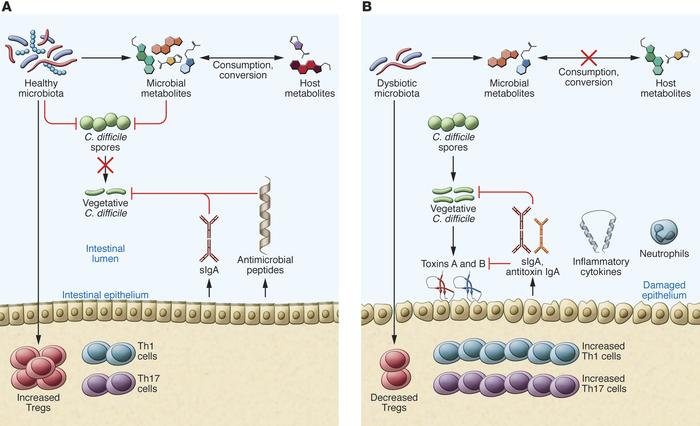 () Both microbial and host factors can inhibit germination and growth of . A healthy microbiota is capable of consuming both microbial and host-generated metabolites, limiting the growth of . Cross-talk between the microbiota and the host immune system results in a regulated immune response. Furthermore, the microbiota can stimulate production of antimicrobial peptides and secretory IgA (sIgA) that can maintain the composition of the microbiota. () Disruption of the microbiota, due to factors such as antibiotic use, drugs, diet, or inflammation, can lead to the development of CDI. A dysbiotic microbiota can result in the loss of colonization resistance due to changes in the structural and/or metabolic environment. The loss of specific community members potentially affects the levels of microbial and host-generated metabolites, resulting in a different functional state that promotes spore germination and vegetative outgrowth. A dysbiotic microbiota may also result in an imbalanced immune response through the loss of immune regulation and a proinflammatory state, both of which may affect disease development. Toxin production by vegetative can stimulate the production of inflammatory cytokines, neutrophils, and antitoxin antibodies.